In an article published last May in Agropalca, an agricultural newspaper from Canary Islands, Ginés de Haro, agronomist and agricultural adviser specialized in banana crop, wrote an interesting article about the development of a mathematical model for making a reliable harvest prediction in banana crop in highly variable conditions of Canary Islands.
Original article in Spanish, page 21: http://www.palca.es/REVISTA%20AGROPALCA%2033.pdf

You may not know that agriculture uses every day a large number of mathematical models that allow it to constantly improve agronomic results, with a reduced environmental impact and increasing controlled production costs.

Why does agriculture need mathematical models?

To address the continuous need to adapt to biological cycles, of plants and animals, of crops and environment, of pests and their predators, which can be highly variable. Climatic variations are one of the key factors of variability, with diversity of crop conditions (species, varieties, method of cultivation, soil types, types of irrigation, altitude, slope and orientation, geography, etc.).
But plants and animals react to a relatively homogeneous way, despite widely varying conditions. This uniformity of reaction and behavior, is what mathematical models seek to demonstrate, measure, and anticipate.
We can predict behaviors in all situations, if we know how to put all the variable conditions in comparison with each other. Mathematical models are one of the most effective ways to predict agricultural and biological cycles.
They allow in particular to anticipate developments of insects or many diseases, to anticipate the needs of plants, their cycles, their blooming dates, their climatic adaptations.
This is for example through the development of a specific mathematical model that health authorities can prevent flights of desert locusts in Africa, and avoid or reduce the famines they can cause.

On what are based mathematical models suitable for agriculture?

They are mostly based on climate records, which constitute a reliable information, easy to collect and process, which will be used as a reference, and on biological observations such as cycle of plants, or such as evolution of pest and predator populations.
The comparison of these two categories of elements, and the accumulation of references from previous years, allows one hand to establish correlations, and secondly to confirm and refine them year after year. This work over the long term helps to establish the reliability of the model and to determine the safety margins.

Once phytosanitary models developed, they allow farmers to anticipate pest or disease damages, through specific actions or curative sprayings in some cases preventive in others, placed at the perfect time, or to develop monitoring or prophylaxis methods.

Let's take a very common example, which is also one of the first reliable models established in fruit production. It is the Mills table, published in 1944, then adjusted by several scientific teams. The development of this model enabled at the time of its disclosure, a drastic reduction in the number of sprayings against scab, combined with a huge increase in the effectiveness of protection, which gave it a great popularity among apples and pears growers.
Scab is a fungus that grows after rain. But some rains cause contaminations, and others not, and their severity varies. Furthermore, protection against scab is primarily preventive, since the spots, once seen, are almost impossible to stop, require a large amount of sprayings to prevent them from getting worse, and cause severe fruit depreciation.

What can the farmer do to prevent damage?
He has to spray before seeing spots. But again nothing is simple.
Has been contaminating this rain?
Can a single fog cause damage?
How soon after rain should I intervene to prevent damage?
How long after rain will the damage appear?
The grower could for example decide to spray once a week, whatever happens, not to make his life harder. He should therefore spray very frequently, not necessarily with a sufficient efficiency, and with an exorbitant environmental and economic cost.
He therefore has the solution to use mathematical models like the Mills table or one of more modern models. He just needs to be equipped with a humectometer, which measures the duration of leaf wetness, and a recording thermometer, all equipment easy to find and affordable, or he can simply take a subscription to a specialized agro-climatic stations of his region.
Whatever the way he chooses, he thus has, in real time, a reliable information about risks. This information will allow him to take the most appropriate decision on the need to spray and the severity of the contamination, thus also on the types of products to use.
The farmer, whatever production method he chooses, organic, conventional or integrated, uses the same references and the same methods. The only change is the list of pesticides to use in each situation. 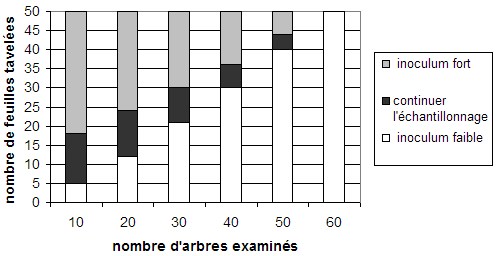 The system also works in reverse, ie by linking the cycle of crop with the weather conditions, to determine periods of sensitivity to certain health or physiological problems, and act accordingly.
Ginés de Haro explains:
"We took different altitudes above the sea and orientations (some farms to the north, others to the south) (...)
We can draw some conclusions from the model. As expected, the cycles are directly related with the altitude above sea level (as the temperature drops gradually as we rise), but also an influence of direction. For example a farm at 45 meters in Fuencaliente has a cycle of two weeks shorter than a farm in Galdar at 16 meters, regardless of the period."
In the case of the Canary Islands, it is particularly important to the extent that they are islands, quite far from each other, varied and mountainous, over which the variability factors are huge, and despite this, the model allows reliable forecasts in all situations.

The use of mathematics in agriculture, even is a challenge for the future, as precision agriculture, recent concept that wants to maximize agricultural production by the accuracy of techniques used, is an unavoidable way for the future of the humanity. This precision agriculture passes, among other things, by modeling a variety of concepts, in order to make predictable all the currently unpredictable aspect of agriculture, that is to say the influence of the variable climatic conditions on living beings.
http://www.fastcoexist.com/3062052/feeding-the-world-with-math

See what happened this year across Europe. Abnormal weather has seriously disrupted the harvest of many crops. French cereal farmers were strongly affected by these disturbances.
http://www.terre-net.fr/actualite-agricole/economie-social/article/les-chiffres-d-une-recolte-catastrophique-de-ble-tendre-s-affinent-202-121268.html
But they recognize they have been surprised. At the end of June, the wheat had normal bulk density, the plants were beautiful. No one imagined that ears were so little filled.
This is the kind of problem it is important to learn to avoid, or at least to manage.
The farmer, little by culture, little by force of circumstances, often live from day to day, and the anticipation of future events is sometimes difficult.
The use models can be a great help in optimizing the work.

The emergence of new technologies in agriculture has been the opportunity to develop appropriate mathematical models. For example, satellite imagery, combined with GPS coordinates, invention of new sensors and adapted equipment, allowed a 5% reduction of fertilizer inputs, sometimes more. http://www.agronewscastillayleon.com/el-uso-de-nuevas-tecnologias-como-el-gps-permite-ahorrar-hasta-un-5-en-fertilizantes
How? Satellite imagery provides a state of the homogeneity of the field, by a simple image, or by colorimetry (photosynthesis intensity), or by thermal imaging (temperature of the leaf, so capacity of the plant to regulate its own temperature). Images are indicative of the health condition and homogeneity of crop, and allow, through adapted mathematical models, to accurately adjust the dose of fertilizer to each sector of the plot. These technologies can also be used for targeted pesticide applications, for accurate seeding and are being studied for irrigation.

To what extend mathematical models are going to play an important role in the development of agroecology?
One of the foundations of agroecology is agriculture, therefore food and renewable raw materials production for human needs. The goal is to minimize the negative environmental impact of agriculture which must be ever more productive in order to cover the needs of the population. These needs are increasing with the increase in population, and with the improvement of living conditions of the poorest populations. But it is essential not to increase the agricultural area, so as not to accentuate the loss of biodiversity, and not to exacerbate the negative environmental impact of the increase in population.

Mathematical models have the ultimate goal of optimizing agricultural production, to reduce the impact on the environment, but also to reduce food waste, at least for the important part that occurs in the fields.

Most existing models were oriented to agricultural crop optimization, or for optimizing cultivation and phytosanitary actions.
The environment is a very complex system, in which all human action has an impact, more or less strong, more or less disruptive, and more or less negative. It is clear that agriculture is one part of human activities whose environmental impact is important. It's necessary to be able to measure it. The farmer works in a production goal, the best he can, but often without the means of measuring or estimating the environmental impact of his work.
It is now important that scientific teams are concerned to develop models for farmers, which relate agronomic actions with their environmental effects. This is still the weak point of the agricultural system.
The water footprint or carbon footprint calculations are the first step, but they are extremely complex, slow and expensive, generally require to appeal to specialists, and don't give a concrete solution to the farmer in his daily practices. It's just an index to measure a specific situation at a specific moment. This explains why very few farmers are actually involved in.
Farmers need quick and simple systems, that they can establish themselves on their own farm, and that helps them to work more efficiently.

The application of mathematical models, combined with the implementation of techniques and cultivation methods from precision agriculture and agroecology, should enable agriculture to meet the tremendous challenge of feeding a steadily increasing world population, without increasing its environmental impact through better use of available resources, while adapting to climate change.
Publicado por Christophe Bouchet en 07:39