The initial reason for my hiring here was the conversion of the irrigation system. Since its origins, the company used only traditional flood irrigation.
The switch to drip irrigation required a technical effort that the production manager could not take on alone.
Before, I was technical advisor for a group of fruit growers, among which the grassing cover in the orchard was a fairly common practice.

Arrived here, I found myself in orchards whose soil was carefully kept very clean, I mean without any weed, by mechanical tillage between each flood irrigation.
The change of irrigation system required adaptation. It was obvious that tillage was no longer justified.
Naturally, we went to total weeding, to keep the soil clean, without mechanical work. The available herbicides allowed an effective, lasting and economical weed control.
This very clean soil was justified by the competition of weeds on the culture, especially for water, in a region, Andalusia, where water is a very precious good that should not be wasted. On the other hand, the presence of grass in spring can increase the susceptibility to frosts. Finally, the presence of grass increases, at harvest time, the ambient humidity, thus aggravating the risks of conservation diseases, thus the post-harvest losses and claims at destination. 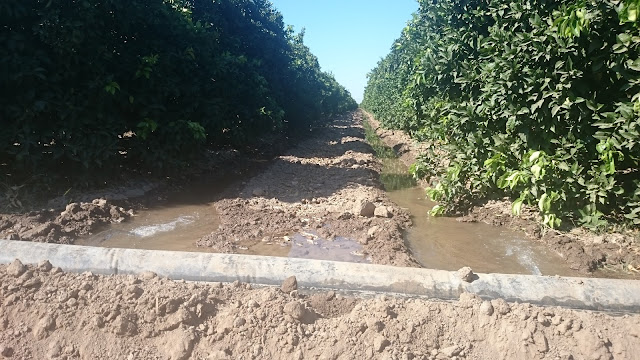 But over time, the end of the mechanical maintenance of the soil also resulted in a compaction, a hardening of the soil provoking a weakening of the orchards by zones, causing important irregularities of vigour and of productive and qualitative capacity.
We decided to invest in decompacting tools, expensive for purchase and use. However, the effectiveness of these mechanical means were generally limited to a few months, or even only a few weeks.

This is where I came to the idea of ​​looking for a sustainable and natural method to achieve this result. A lot of specialized reading, a few trips and many contacts then convinced me to test in local conditions, the installation of grass cover.
I first had to look for references to find plant species, adapted to these soils and especially to local climatic conditions. It must be said that here, winter is characterized by a lack of cold, summer is long (4 to 5 months), very hot (it is normal to exceed 40ºC), and especially very dry (at least 4 months without the slightest drop of rain). References being limited, seeds being expensive for a very uncertain result, I decided to work differently, from native species, necessarily very adapted to local conditions.
Some weeds can be very problematic here, especially mallow (Malva sylvestris), which easily takes enormous proportions, bindweed (Convolvulus arvensis), very invasive and climbing, purslane (Portulaca oleracea), very big consumer of water and Canadian Erigeron (Conyza canadensis) which tends to choke everything. All these plants are dicotyledons, and their control can therefore be based on selective herbicides. The only problematic grass is the nutgrass (Cyperus esculentus) which is very competing in nutrients, and very invasive on bare soil.

My decision was therefore to apply a selective herbicide on germination caused by the first autumn rains, to prevent these problematic broadleaf weeds from gaining the upper hand. Of course, grasses, unaffected by these herbicides, started very well, but very sparse at first, and nutgrass, which starts later, continued to dominate for the most part. It took 2 to 3 years for the vegetative cover, almost exclusively made up of native grasses, to establish itself sufficiently, to cover all the inter ranks, and to drastically reduce the invasions of problematic plants.
Grass is now well established, and it is normal not to need to use any herbicide. However, in some places, the first autumn sprouts can still be dominated by these invasive plants. In this case, an early and low-dose application of a selective contact herbicide prevents them from becoming problematic.
In the rest of the orchard, where no herbicides are applied, the vegetative cover, initially consisting exclusively of grasses, gradually diversifies, with the ever-increasing presence of various dicotyledons, including some sporadic specimens of problematic species. 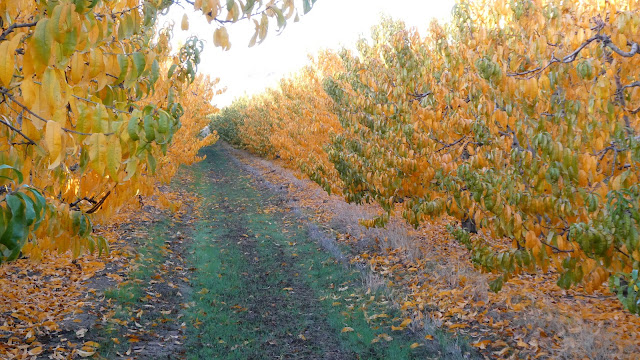 The grass cover, in this case, works differently than what I knew in France, where it's permanent, present all year long.
Here, it appears after the first rains, is more or less full and vigorous depending on the weather conditions of autumn, winter and spring, and dries completely during the summer.

I would like to point out that the only extractions made in our orchards have always been fruit, and big wood when we tear away old trees. To this we must add some wood in case of sanitation pruning that we sometimes have to do to solve a difficult phytosanitary problem (Phomopsis amygdali for example). All normal pruning woods, leaves and other plant remains are always left on the spot and milled.

Several years of experience of this system allowed me to make some very interesting observations on the effects induced by this temporary grassing.

On the purely productive level, it can be seen that irregularities in the orchard due to soil compaction have almost disappeared. With this change, the overall productive potential has increased by a simple homogenization effect.
This effect on the soil can also be confirmed by other simple observations:
-       During rain events, often torrential in this climate, the penetration into the soil is greatly improved, avoiding runoff, reducing the saturation of drainage ditches, erosion, and improving the capacity of water storage by the soil.
-       The bearing capacity of machines is greatly improved by the presence of grass, even after the rain. Only repeated passages during harvest may be a problem (but less than before) in the traffic ranks. 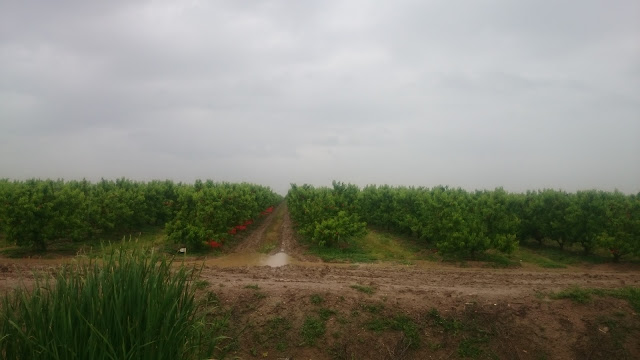 
-       The staff, abundant in peach trees, because everything is handmade, pruning, thinning and harvesting, is always working on a buoyant soil. He just needs rubber boots so he does not get wet in the morning with dew.
-       It is usual in drip irrigation to have to repair a buried leak. It's the occasion to observe a strong presence of earthworms, which was rare to observe before. When we know the fundamental role of these animals in life, fertility and structuring of the soil, it is obviously a huge benefit.
-       A very common pest and very detrimental here is the Mediterranean pine vole, Microtus duodecimcostatus. It is difficult to control, has an exponential multiplication, and can cause serious damage to woody crops, since it feeds on roots. The grass did not make them disappear. But instead of migrating in summer to the wet zones of drippers, it now stays in the grassy area, where it finds both favourable conditions for its galleries, and many roots of the grass that are the basis of its diet. A peaceful coexistence in short.
-       Rabbits and hares, very present in our orchards no longer attack the bark of trees since they find grass all year long, green for 8 months, dry for 4 months.
-       It is noted, although the relationship with grassing is not certain, a reduction of the pressure of certain pests such as mites or thrips. It is likely that some of the populations will remain in the grass, and that on the other hand, their predators will find favourable conditions for an early development, thereby ensuring a natural limitation of the populations in the orchards.
-       In general, populations of snakes, foxes, weasels, raptors, bats and other predators have increased significantly, providing better control of birds, rodents and other problematic insects.
-       Throughout this period, we have continued to reduce fertilizer inputs, particularly with regard to nitrogen, but also calcium and phosphorus, reaching levels that, very sincerely, I did not imagine to achieve, while increasing the productive and qualitative potential. This is the reality. This led me to start this year a study on soil fertility, as well as their biological activity.
-       I will add another advantage, not insignificant when it comes to fresh fruits, difficult to wash, as is the case of peach: pickers don't stain with mud, nor the hands, nor themselves, or crates, even in case of rain, thanks to this plant mat, giving a cleaner fruit as a whole, which is undeniably an improvement in the quality of the product presented for consumption.

Are there any defects?
Actually I don't see much.

The risk of spring frost.
The presence of grass increases the radiation, so the risk of frost.
One can imagine the application of a low-dose defoliant herbicide during the period of risk, just to burn the leaf and stop its activity temporarily.
Personally I prefer mowing, which has the same blocking effect for a few days, and avoids the use of herbicides.

Conservation issues.
A mowing just before harvest can largely prevent them, and on the other hand, modern fungicides (synthetic, of course, but also biological) have a level of efficiency much higher than those of the last century. However, mowing is essential to avoid keeping under the trees a humid and confined atmosphere, favourable to the development of conservation fungi.

The risk of fire.
Dry grass stays on the surface. Until now, mowing in early summer, which coincides with the grinding of summer pruning wood, has always been enough to avoid this problem.

My experience is not scientific. It resides on my observations, my decisions and my conditions of soil, climate and crop.
But I am convinced that these practices, which are very easy to implement, have a very positive impact on soil microbial activity, biodiversity in general, health balance of the farm, and ultimately on the sustainability of the crop and agricultural activity as a whole.

We can also talk about cost. In fact, grassing cover management is a bit more expensive than an herbicide on the whole surface. There must be at least one more tractor pass per hectare to mow the grass.
But if my observations are correct, reducing the cost of plant protection and nutrition largely offsets this extra cost.
Not to mention that the approach is both in the context of reducing agricultural inputs, and with a view to reducing the impact of agricultural activity on biodiversity and the environment.

It is obvious that grass cover is a technique that can be used mainly in woody crops, orchards, vines, citrus fruits, almond trees, olive trees, biomass crops, etc.
Other branches of agriculture look for the same effects with different techniques, as is the case with conservation agriculture, more for annual crops, which seeks to minimize ploughing, either by seeding directly on the remains of previous crops (sometimes with the use of an herbicide in preparation for sowing), or with planting under cover of living plants (in an attempt to avoid the use of the herbicide).

These techniques, which show every day a little more their efficiency, and their compatibility with a technical and economic result of high level, are gaining momentum, and gradually tend to become generalized.
This is the demonstration that conventional agriculture can be very environmentally friendly, while being very productive.

It's is also this, the sustainable farming.