For the first time, I'll tell you about a subject that was virtually unknown to me before preparing this publication.
Agriculture can not be learned from books.
In agriculture, the mere reading of literature, in no way may have value of knowledge. The only really useful knowledge is acquired through experience, or failing that, through experimentation. In this case, I have nothing of that.
Why this unknown subject?
Because in my series on production methods, it seems obvious that it has its full place. This is not just a secondary branch of organic farming.
Because biodynamic production is booming, which in itself is something notable, and it receives a growing acceptance among distributors and consumers.
The rise of biodynamics in recent years is especially important in viticulture. Some great wines, in all AOC have done its conversion,  or are doing it.

For a Cartesian mind like mine, some aspects of biodynamics are troubling, even wacky. However, it is clear that a growing number of farmers are following the principles.

I'll try to do a portrait that allows you to understand the specifics.

The emergence of Organic Agriculture Movements occurred in the interwar period, that is to say in the 20s, probably due to the awareness of the risks of chemicals. Do not forget that until the early twentieth century, chemistry was a new science and industry, very promising, both in medicine and in agriculture and industry.
But the First World War presented a new face of chemistry, and especially of its dangers. The widespread use of poison gas, and their disastrous consequences on the health of veterans and the environment, has raised awareness of possible abuse and real risks.
This awareness has undoubtedly been one of the main reasons that led to the birth of the environmental movements and the various branches of organic farming.

BIODYNAMICS
It is a branch of organic farming, whose theorist and first discloser, very controversial, was Rudolf Steiner, who put the principles in 1924, by a series of lectures given to farmers through Germany.
To the refusal of the use of chemistry in agriculture, it added a deep research of natural balances. He added too the partial or total refusal of mechanization, with a basically manual activity, and the return to draft animals.

In a way, it carries the concept of organic farming at its maximum. Indeed, the organic farming, in general, is almost a conventional farming, but without synthetic chemistry. In this context, the chances of success are limited, since, in essence, agriculture disturbs the natural balances. The simple act of sowing a field of wheat or planting an apple orchard is a contradiction with respect to Nature.
Biodynamics seeks to recreate the balance disturbed by agriculture, integrating as far as possible, the respect of natural rhythms that modern agriculture has often lost (lunar, planetary and zodiacal cycles), taking into account, actively and permanently, the influence of "cosmic forces", and doing significant efforts in terms of biodiversity.
It uses the concept of "agricultural organism" considering each farm, or each set of farms, as a living whole, with the need of maintaining it the most diverse and independent as possible. It seeks, in this, to minimize the inputs requirements that are necessary elements in the production, that the farmer has to get outside because not produced on the farm (plants and seeds, fertilizers, plant protection products, ...).

Although I have not found the reference anywhere, I seem to see in biodynamics, the search of a Druidic knowledge, lost for centuries, in which Nature Nourishing Mother, holds a prominent place.
In biodynamics, soil has a central role, and everything is done to support its life, its balance, and its "harmony". Somehow, we can summarize the philosophy as follows: the plant feeds from the soil, so the soil balance is the plant balance too.

Some aspects are very surprising, as may be the case for some invocations, communication with insects or pests, applications strange preparations based on esoteric principles, etc..
One of the basic preparations of biodynamics is the "horn-manure" or 500, which consists in filling the horns of manure, to bury them in the winter, turning manure into a natural humus which can be applied to the soil or on the plant.

The 501 preparation is made ​​with finely crushed quartz, buried in the earth in summer within cow horns. It is used as a foliar spray on plants with very low dose.
Foliar treatments are carried out with the preparations 500 and 501, after dilution with rainwater or springwater, and "dynamized" by a specific agitation system to create a "energetic chaos" essential for the spray effectiveness.
There are 7 other preparations (502-508), based on plant extracts, especially used for the elaboration of natural compost, basis of the plant nutrition in biodynamics.
Rudolf Steiner believed that these preparations were transferring to the soil, land supernatural terrestrial powers and cosmic forces.
Biodynamics uses incineration technique to fight against certain parasites. It is to capture individuals and incinerate them by a particular method. The moment of incineration has also of great importance, because it takes into account the relative positions of the planets,  for the ashes to be charged with the adequate cosmic force. For example, to fight against the fieldmice, take the skin of a fieldmouse and incinerate it when Venus is in front of the Scorpio constellation. In this way, the ash contains the "negative force that opposes to the reproduction force of the fieldmouse."
The ashes are then diluted to the extreme by a particular method and then dispersed in areas to be treated. Real doses applied are close to what is practiced, for example, in homeopathic medicine. 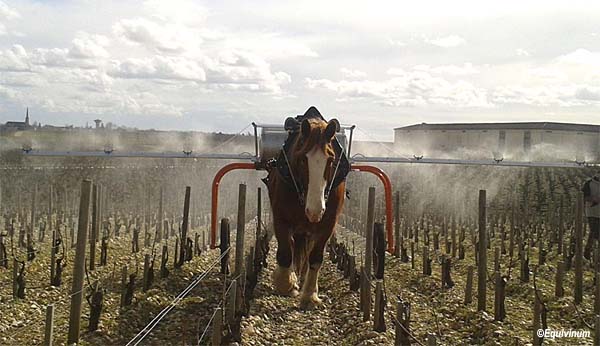 I am quite skeptical regarding difficult cultures, as is the case of peaches, my speciality. But in some generally very hardy crops, like the vine, cotton or tea, or in gardens, the results seem positive.

Requirements regarding the farmer are very high, since any imbalance, natural or induced can have serious consequences, and may be difficult to rectify. This requires a large presence in the culture, fine and regular observations, reflection and the search for solutions to sometimes invent the integration of culture in a global set at the farm and its environment.
In addition, the grower must devote significant time to the development of the different preparations and to their use at very specific moments.

Regarding livestock, biodynamic attaches a great importance to the animal welfare, and to the respect of its productive capacity. The animals are still raised outdoors with a space that suits them, it does not force the animal to produce more milk or more eggs that it can, etc ... Livestock must be integrated into the "agricultural organism" combined with various crops. Indeed, the significant needs manure and horns are a key element in the operation of the production system.

Biodynamic agriculture may also be certified. There are several brands, but the most important, acting in more than 50 countries, is Demeter. The certification aims to verify and authenticate that the production meets the specifications, and that traceability is maintained. It is a guarantee of reliability of the producer.
But never forget that certification, as in the case of organic or conventional agriculture, is not a guarantee of eating quality (about that point, see my article No. 16 "Farming Methods -2 - Organic Farming", May 2014). It is a guarantee of fulfillment of the commitments of the farmer.

Biodynamics seeks to produce without any action which could disrupt the balance of the farm. It's ambitious, and very difficult. Manycompatible methods and techniques, are yet to be invented.
We may, in some way, and looking it from outside, consider biodynamics as a research laboratory, with a real scale. Farmers who dare to launch, have much merit, and little scientific support. It must be said that there is in the biodynamic philosophy, a rejection of conventional science.
But this scientific isolation, accompanied by a quite extreme (or extremist) ideology and "pseudo-scientific" aspects that are part of the method, can lead to exaggeration, as we have seen recently in France with the case Emmanuel Giboulot (see my publication No. 7 "I did not sign the petition," February 2014).
Should we blame him for his choice? Yes, for his disobedience, but especially for his extremism and selfishness. Biodynamic winemakers of Burgundy all agreed the necessary treatment, except him. A farmer, regardless of his philosophy of production, is never alone in the world. It is surrounded by a diverse set, with an unstable and fragile balance. In this case, the choice of this winemaker has not only an impact on his own farm, he would have the right to make this choice, but also its entire production area, neighbors included, choice that he has no right to do alone.
"Liberty consists of doing anything which does not harm others: thus, the exercise of the natural rights of each man has only thoswe borders which assure the other members of the society the enjoyment of these same rights. These borders can be determined only by the law. "Declaration of the Rights of Man and of the Citizen, Article IV, France, 1789.

Biodynamic agriculture is little proselytizing. It is exposed primarily in fairs and began to appear on some shelves. It's possible to see it especially on wine labels. It benefits from general actions on organic farming.
It has a good reputation and is talked about in the magazines, although hardly anyone among consumers, does not know what is the difference with "normal" organic production.

This is likely a way to bring different ideas to an agriculture working hard to progress (though some may think the contrary), but are often afraid to stray off the beaten path.
I remain still quite bothered by this important esoteric and mystical side, which I entered, neither the purpose nor the results.
Moreover, proponents of biodynamic themselves recognize that some aspects of the process can not be scientifically explained.

That said, if you want to consume products without risk of residues of synthetic or natural pesticides, it is the best way. For cons, I did not find any information regarding the risk of bacteriological contamination, . And on this point, I think there is a risk as well as for organic production.

And for the future, biodynamics would it be able to feed the world when it has more than 10 billion people? Honestly, I do not think so. Or at least, not with the current knowledge.

If you want to learn more, I invite you to visit the web pages that I used to write this post. There are many others, as well as blogs and forums. Much of the available informations are about the vine and the wine.
You will also find all kinds of information and fiercely opposed blogs. But again, agriculture can not be learned in books or on the Internet. If the method is developed is that it brings something that farmers who are converted, found in its implementation.

Next chapter of this serie : integrated farming.