When good weather is bad weather...

It is said that farmers always complain. In fact, it's quite true, we must recognize it, particularly with regard to the weather. The sayings of each country is an indication of daily life.
Here in Spain there is a saying that "nunca llueve a gusto de todos", ie it never rains to everyone's taste. It is normal, in a country where most of the territory lives in a semi-arid climate, with periods of usual drought of 4 to 5 months, that the rain is the protagonist.
In France, where rain is frequent, where is considered a drought period if over a month without rain, they will rather say, to feel better "après la pluie, le beau temps", that means after the rain, comes the sun. In this case, the good weather is the protagonist.

Each one has his own definition of what is a good weather, according to his needs or projects.
As good city-dwellers, good weather is your opportunity to sunbathe, go to the beach, play tennis, go for a walk in the park or forest, or grilling.
As good farmers, it is an opportunity for you to prepare the soil, make a seed or harvest.
But for me, fruit grower, the weather can also become an active member of the unpleasant and costly bad weather club.
You will now understand why.

Each plant has a specific growth cycle that it carries in its genes from its origins, with specific needs at each particular moment of the cycle.
The specific case of the peach tree is:
-       At the end of the winter, the bud begins to swell, following several recognizable stages, classified from A to J, the most characteristic one being the blooming stage F.
-       Next comes the fruit set, that is to say natural selection causes abortion and fall of unfertilized flowers, and least fed fruit. This is the stage J.
-       Fifty days after full bloom, occurs the stone hardening. Until then, the little fruit was in formation, in cell multiplication phase to make in priority the seed, that is to say the almond of the stone, its reason to exist, then the wood core, the physical protection of the seed, then the flesh, primarily a reserve of water and nutrients to allow the tree to reach the end of seed maturation in case of difficulties, and finally the skin, protector of the flesh.
-       In the last phase of the cycle, after the stone hardening, the growth process allows the fruit, now fully formed, to accumulate water and reserves while the seed ends its evolution. When it is mature, it produces ethylene, which causes fruit ripening and abscission of the stem, causing its fall, if it has not been picked or eaten before.

What will happen when the weather is "too good"?
Depending on the period of the cycle, the consequences are different.
-       A too good weather, during cell multiplication phase (between flowering and stone hardening) is rare. This period is especially sensitive to cold conditions, humidity or lack of light caused by a very prolonged overcast weather, which can reduce cell proliferation activity, and thus reduce the fruit's ability to get a large size.
-       A too good weather during the stone hardening phase may cause it to break or separate the two halves of the stone. This phenomenon results in a downgrading of fruit affected, or a marketing ban. Indeed standardization prohibits the sale of fruit whose stone is open, although it does not affect its quality. We recognize these fruits by visible opening in the stem point, often with fruit deformation in two very distinct halves. This can also be a gateway to various conservation fungus or earwigs. 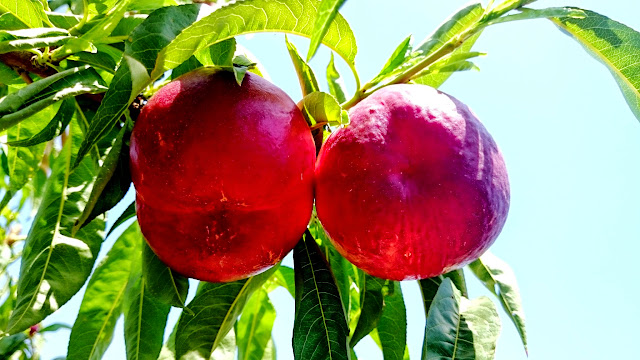 The nectarine on the right side is normal, the one on the left side has the stone broken.

-       Finally, a too good weather during the last phase speeds up the stone maturing process, thus fruit enlargement, with the production of undersized fruits and low taste potential.

This year's season began with a cold spring, though without frost. Blooming was very late. The cell multiplication phase lasted unusually long, held back by the cold weather.
Then the weather changed dramatically, accelerating the cycle a lot.
Finally, the earliest varieties have reached quite normal dates.
Late flowering + normal maturity = abnormally short cycle.

To give you some idea of ​​the consequences, I'll give you some numbers.
In the traditional areas of culture of peach, cultivated varieties have cycles between 110 and 180 days, between blooming and harvest.
Here, as in North Africa, Mexico, the Middle East, Australia or the southern United States, we plant varieties whose cycle is between 75 and 100 days, sometimes less. These varieties have very short cycles, but give very similar fruit characteristics to those of traditional areas. The final grow-out can be more than 1 mm per day.
This year, the cycles are shortened on the earliest varieties that is to say that they have shorter cycles between 5 and 8 days.
In the commercial classification standard, a peach diameter 58 mm is a small fruit that will weigh about 110 grams, while a peach diameter 68 mm is a large fruit that will weigh about 150 grams.
A tree that bears 400 fruits will therefore produce 44 kilos of fruit if they weigh 110 grams, but 60 kilos of fruit if they weigh 150 grams.
These 16 kilos of difference are 8 tons per hectare for an average density of 500 trees per hectare.
If you add to that the farmer will be paid almost double for a fruit size of 68 mm, than for a fruit size of 58 mm, you see that the economic result has nothing to do.
That's why the peach grower does not always like the good weather, or at least when it arrives at the wrong time. 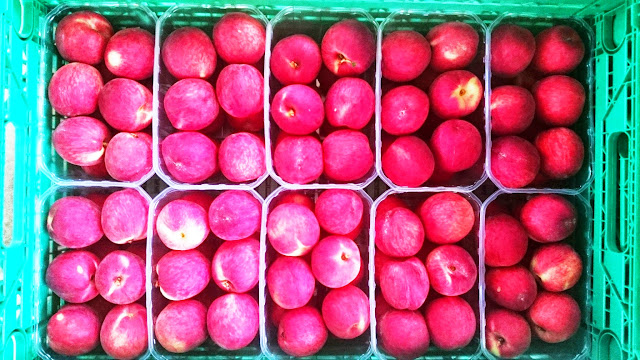 To this, we must add that the work conducted in France by INRA and CTIFL, with the collaboration of specialized professionals in the 1990s, and published in the monograph CTIFL "The peach", have shown that there is a direct relationship between the size of the peach and its ability to taste quality (works which have also been the basis for a revision of marketing standards for the taste, and the marketing ban of the smallest size). More the fruit is small, more there is a risk that its taste quality is not satisfactory.
That is why the informed consumer does not always like the good weather.

Then last problem of too good weather, the heat stroke.
Heat stroke can have a direct effect on the fruit, as you can see on the next picture, taken on May 13 in the afternoon here in Seville, with an outdoor temperature that exceeded 41,5ºC. The flesh is overheating to the heart, and the nearest mature fruits can "jump" over-ripe in a few hours without having had time to reach the expected level of size and quality. 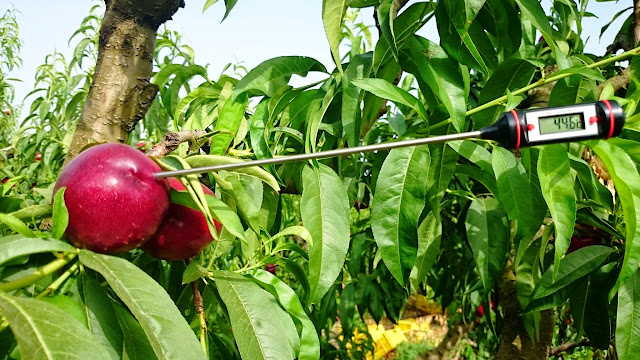 It may also happen that the plant does not have the capacity to provide water in proportion to the climatic demand. If the fruits are not harvested, the tree will pump in the water supply and nutrients that they represent, while accelerating the ripening process in order to save as many seeds as possible. It "knows" that it cannot afford to survive a long time in such conditions. It will therefore trigger a hormonal process in order to ripen the fruit in an accelerated manner, regardless of its quality, and all together. This phenomenon is usually accompanied by a dehydration of the fruit (the plant consumes its water), often making it unsuitable for commercialization.