THE SPIRIT OF PLANTS - SHYNESS

Shyness is a human feeling that "implies a timid reserve and a shrinking from familiarity or contact with others", as explains the Merriam-Webster online dictionary. In other words, it is a difficulty to get in touch, to approach others.

How can this definition be associated with the plant world?

But first, can we lend human feelings to plants?
No, probably not.
It is already difficult to do this for animals. Modern romanticism has created what could be called the Walt Disney syndrome, which humanizes animals to the point of lending them feelings that they probably don't have, pushing some to vegetarianism or veganism. It is indeed easy to identify oneself with animals, so to transfer on them our human feelings.
It is therefore almost impossible to do this for plants, with which, unlike animals, we can't identify ourselves, and with which in general we don't feel close (which is, however, probably a mistake). They are alive and hold an essential place in the cycle of life, and in our lives as humans.

Yet there is a curious phenomenon in some plants that scientists have called shyness. This word is controversial in the scientific community, precisely because it transposes to plants a purely human feeling.

The fact is that some trees are unable to have contact with their neighbors.
As Francis Hallé, a famous French botanist, a great scientist and exceptional communicator, explains (in French), many hypotheses have been put forward, in particular one according to which the movements of trees due to wind cause lesions on the peripheral shoots of the foliage, preventing them from developing, and causing these faults in the cover of tall trees.
The problem is that they are 30 to 40 meters tall, sometimes more, and it was difficult to verify.

Until the first expeditions in the summits, in the late 80's, thanks to the invention of the "Radeau des cimes" (raft of summits), by a team of which Francis Hallé was part, with specific equipment allowing scientists to settle on the foliage and to stay there, to study its structure, biodiversity, evolutions, in short, its life.
These expeditions 40 meters above the ground, revealed a world hitherto unknown, sometimes even unsuspected, to them.
It is surprising to think that 20 years after man walked on Moon, the top of the great trees remained a world to discover.

And the theory of damage to young shoots fell by itself, because no lesion is observable, which could justify this behavior.
However, certain assumptions are under study. One of the most serious studies is the potential emission of phytohormones between leaves and peripheral branches in order to inhibit or divert neighboring shoots.

But another question is to understand why this phenomenon exists.

It could be a measure to allow a certain amount of light to pass, in order to promote life on the ground. The majority of living beings need light. However, in primary forests, the thickness and height of the canopy reduce or block the passage of light, leaving the levels closest to the ground in a penumbra, or even a permanent night. It could therefore be a measure of regulation of light in order to allow the life of certain animal and plant species on the ground.
It could also be a health measure to reduce or avoid infectious contagion. The very thick foliage does not let drafts pass, reducing the capacity of aeration and oxygenation of the lower strata, favoring the development of fungal and bacterial diseases. Aeration of the canopy could be a measure of sanitary preservation of the whole life of the place.

Shyness of trees seen with a thermal camera. However, this phenomenon also exists at the level of roots, not necessarily on the same species. Some are "shy" at the top but not at the bottom, others at the bottom but not at the top, others at the top and bottom, but a large majority of species show no sign of this vegetable shyness.
Today, among the 391,000 plant species scientifically registered (https://news.mongabay.com/2016/05/many-plants-world-scientists-may-now-answer/), only about 100 of them are showing this particularity.
Obviously, the theories given for the aerial part are not valid for the root system.

Scientists are always confined to conjecture. One day we will understand this behavior. Maybe I'll have an opportunity to talk to you again of this subject.

We already knew that plants are capable of collaboration between species (https://culturagriculture.blogspot.com.es/2016/07/83-spirit-of-plants-5-spying-or.html).

Perhaps one day we will discover that some plants are capable of influencing the development of their own environment, of the plant and animal society of the place, a kind of personal adaptation intended for social development. Perhaps it is simply another expression of the strategies developed at the level of a biome (https://culturagriculture.blogspot.com.es/2015/12/62-spirit-of-plants-4-strategy.html).

While waiting to learn more about this curious phenomenon, nothing prevents us from enjoying these magnificent images. 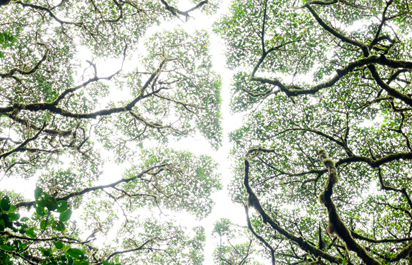