THE SOIL IS ALIVE

I created my blog in early January 2014. To find information (and inspiration), I also developed my network on LinkedIn. Then I created a Facebook page, and finally in August 2014, a Twitter account. I also have a Google+ account, but the running is very different, and I cannot publish at will. Google has threatened to close my accounts if I continued to publish as much. So there, are only published my blog articles.
Anyway, this is not the issue.

So I started to get an impressive amount of varied information about my writing poles, agriculture, food and environment.
I realize that this mass of varied information has had some influence on my way of thinking. People who know me well can certainly confirm this. I think I gained some moderation on certain subjects, while having gained height of view.

I began to seriously think about soil management issues for some time, daily confronted with compaction problems, in soils where are implanted orchards I manage. I actually started to change some aspects for 3 to 4 years. The most visible aspect is certainly the vegetal ground cover between rows of trees, as opposed to the bare ground used before.
However, the reading of many articles, and conversations that I have had on the subject with my advisor in plant nutrition, Miguel Ybarra (who tried to start a promising blog about agronomy, that unfortunately stayed down after its first publication, there was one year), led me to think further.

The modern agronomy, as it was designed and used, at least in the second half of the twentieth century was mainly interested in the structure and chemistry of the soil (the clay-humic complex, interactions between mineral components, the importance of the organic matter on the soil structure, etc.).
Finally, soil biology only recently made part of the information divulgated to farmers, probably under the influence of organic and biodynamic agriculture movements. Yet a number of scientists have devoted their entire professional career, but the results of their work have had a quite recent impact on production.

The taking into account, by the political power of a few countries such as France in recent years, of environmental aspects as a starting point to change cropping patterns of farmers, with the development of agroecology, further reinforces these aspects.
In addition, 2015 was devoted International Year of Soils by FAO, so the number of events and publications in these areas is increasing.

And I realize the change that I am currently operating in the way I think about soil management. I guess it is positive, although it is still too early to measure its impact.
Still, some points seem to me very significant (the list is not exhaustive, far from it):
The soil represents a quarter of the biodiversity of the planet, which means that a living organism of four is living under our feet. We don't see it, and we have absolutely no awareness of the impact of our daily actions on these lives.
Earthworms have not only a role in the production of humus and soil aeration. They are also "soil manufacturers' going up from the depths the mineral elements that will form the agricultural soil. The techniques and products used must therefore preserve them as much as possible.
Lignin, main component of wood and straw, is attacked and decomposed by soil fungi, to free the mineral components that plants will use. But these fungi live in the first centimeters of the soil and are therefore very sensitive to cultural practices and products, chemical or natural, used in agricultural production.
On the other hand, some soil fungi called mycorrhizae, live in symbiosis with the plant, which gives them shelter and livelihoods and multiplication, in exchange for its work of mineralization and provision of elements, especially in the case of phosphorus.
Soil bacteria have a leading role in the provision of minerals for the plant.

For a long time, agriculture has considered the soil as a simple culture medium that could freely be managed to promote production.
But this error of concept and the abuses it led, till the end of the last century, have sometimes been able to reach soil sterilization situations, or serious loss of soil through erosion.
But the living soil, the one that enables plants to live, feed and grow is only a thin layer of a few tens of centimeters thick. It is crucial to be aware of that and to respect it.
Some soils are very deep, that is to say that the layer of rock or impermeable clay is several meters or tens of meters deep. In these soils, there are roots till the bottom, of plants that go in search of water, essential to their survival.
Yet it is the most superficial part, with its teeming life, which is the part of both the most active and the most delicate. 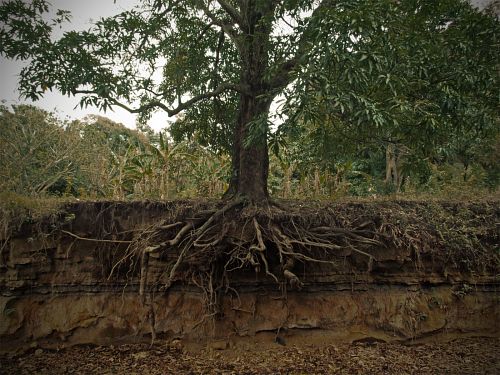 
We also see that the tree has developed a huge shallow root system, extensive and dense, to be able to capture a large amount of nutrients where organic matter can release them, and roots that descend to the depths, which serves both to anchor firmly, and to pump deep water in the case of surface drought.

In short, the soil is a world in itself, structured like any society, with its dominators, its servants, its associations of mutual interest, the good and the bad, its struggles, its antagonisms and its interactions.
Many of these operations are still poorly known, but many scientists are working in there, because it is increasingly clear that the soil is one of the main bases of the future development of agriculture towards a production, both more efficient, both in terms of productivity and in nutritional qualities, and respectful of natural balances.

The soil is one of the major challenges of tomorrow's agriculture.

Another new series of which you will see new chapters gradually.
Publicado por Christophe Bouchet en 17:58