On December the 1rst, the prestigious Princeton University, published on its web page an article entitled "Theory of 'smart' plants may explain the evolution of global ecosystems", published shortly before in the very serious journal Nature Plants.
https://www.princeton.edu/main/news/archive/S44/88/96G13/index.xml?section=topstories

Smart plant?
The author of the theory, Lars Hedin, professor and director of the department of ecology and evolutionary biology at Princeton, said "Our theory explains biomes based on the new idea that we must consider plants to be smart and strategic". And also "This is a global theory that explains why biomes differ in nutrient conditions and in their abilities to respond to disturbances and to absorb carbon dioxide from the atmosphere."
For those who don't know, a biome or biotic area is "a formation of plants and animals that have common characteristics due to similar climates and can be found over a range of continents" (Wikipedia definition).

The theory is based on the observation of plants, of legume family for most, which have the ability to extract from the air, the nitrogen, essential to their development, while other plants must extract it from the soil.

Rhizobium on roots (extract from The Oxford Journal)

“These plants, known as "nitrogen fixers," use secretions to invite soil bacteria known as rhizobia to infect their roots cells. In exchange for carbohydrates that the plant produces by photosynthesis, rhizobia convert nitrogen in the air into the fertilizer form plants need, with excess nitrogen from the host plant eventually creating a nitrogen cycle that benefits neighboring trees”.
Lars Hedin explains: “Generally we think of plants as responding passively to their environment, but we found that they can in fact be quite strategic. Our theory suggests that the distribution of nitrogen fixers across biomes, and the great success of fixers in tropical forests, is a result of the evolution of 'smart' plant strategies in tropical forests in particular”.
The study worked on two different climatic situations.
On one side, tropical forests, and on the other side temperate and boreal forests. Their role in these situations is directly related to the recovery of disturbed soils (floods, landslides, fires, etc.).

In tropical forests, soils are naturally high in nitrogen, and paradoxically, legumes are extraordinarily powerful, numerous and diverse. They use their self-generation of nitrogen capacity for feeding abundantly in their juvenile phase, allowing them to dominate. At the same time, the excessive nitrogen is widely used by neighboring plants which benefit to also have a powerful growth. This explains the extraordinary ability of tropical forests to recover, in record time, the devastated or abandoned by humans areas.
Then, nitrogen production becoming excessive, they "turn it off" in order to save the energy their exchange with rhizobia requires, to redirect it to their growth needs, in their battle for solar energy, in an environment where the vegetation thickness is a limiting factor. This allows them to live very long years. This is a strategy for powerful growth, wherein the nitrogen-fixers first promote the biome overall growth by generating a large amount of nitrogen. Then they reduce or stop this "altruistic" and exhausting action, to stay in a situation of domination.

In temperate and boreal forests, where the soils are much poorer in nitrogen and slower to regenerate, scientists expected to see a clear dominance of legumes. Yet it is not. In fact they use their capacity otherwise. They are present, of course, but so much more anecdotal. Their role becomes crucial in a situation where it's necessary to regenerate the soil after a fire, for example. They will use a different strategy, in which they will produce a large amount of nitrogen during the juvenile phase, to allow their non nitrogen generator entourage to recover health. But in these poorer soils, legumes don't "turn off" the nitrogen generation, so that they exhaust themselves to the task and are dominated by other species in the struggle for sunlight. This strategy to help the survival of other species and biome usually ends up being counterproductive, since with the depletion of legumes and their gradual disappearance, soils start again getting poorer.

"Tropical nitrogen-fixing plants are “smart” enough to know when to use costly nitrogen fixation to compete with neighboring plants, and when to turn it off, as if they are sentient beings," Lars Hedin explains. "Nitrogen fixers in non-tropical zones are initially super competitors but end up fueling their own demise. Because their fixation is not strategic in the long term, they spread nitrogen around to their neighbors and their neighbors overcome them."

Benjamin Houlton, terrestrial biogeochemistry professor at the University of Davis (who was not involved in this research) estimates that this work will allow progress in "our search for an evolutionarily coherent theory for ecology." He adds that these plants could be able to adapt to global warming. 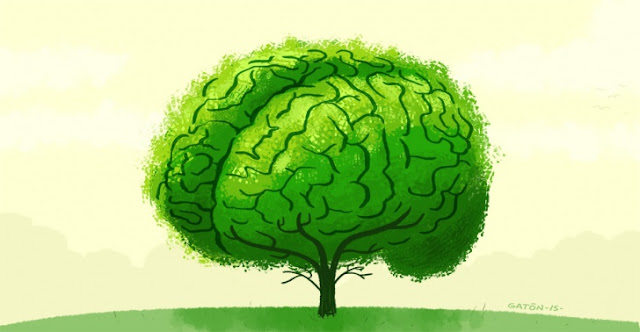 Design by César Mejías from the article of El Definido

As stated in the conclusion section of the Chilean web magazine El Definido (in spanish) on the same subject
http://www.eldefinido.cl/actualidad/mundo/6186/Nueva-teoria-sugiere-que-plantas-son-capaces-de-tomar-decisiones-estrategicas/
“What does that mean for us humans? What if one day we are beginning to suffer the consequences of climate change, it is better that we are surrounded by tropical nitrogen-fixing plants”.

This leads us to think that plants are organized into societies, biomes, in which each plant or group of plants plays a special role, useful to the entire biome and in which power struggles exist, variable according to surrounding conditions.