36- I am Charlie. Caricaturists, take your pencils!


I AM CHARLIE - CARICATURISTS, TAKE YOUR PENCILS!

Today, I won't talk to you about food or agriculture. Why?

Because in these days, I cannot publish anything which is not related to the attack against Charlie Hebdo.
This is both a way of mourning, of respect, and a sort of hangover. All I can post seems to me little, without interest, given the enormous consequence of this despicable act.
Because it must be said that it is despicable, and it's mostly a sign of weakness of mind, a complete lack of intellectual argument, or rather a denial of the value of intelligence.
Those targeted were columnists and caricaturists, often excessive (it is also the proper of caricature), but whose only purpose was the defense of freedom of thought, freedom of press and freedom of expression, regardless of religion, race or political affiliation.
That's why the shock is so important, even among people who, until then, disliked or hated Charlie Hebdo.
Suddenly, with this multiple senseless murder, everyone realized the importance, in a democracy, to have a handful of cartoonists, often excessive, which constantly remind us that our freedoms have a cost, are fragile, and that they are attacked from all sides. Caricaturists are the defenders of our freedoms.

This crime is primarily an attack on the values of freedom that France, like many democracies around the world, included in their constitutions.

The politically correctness, which has gradually invaded our daily lives, kills freedom of thought, freedom of press and freedom of expression.

What is the problem?
Our societies do not prepare their citizens to understand caricature.
The caricature has a real social and political function. It is used to highlight and criticize abuses.
Who will criticize a normal situation? There is nothing to say, because it's normal. The caricature always attacks excesses and drifts. And that's very healthy.
The caricature is and must remain a sort of safeguard for freedoms and institutions.
But to get the scope caricature seeks, the people must have been prepared to understand it, to interpret it positively. Otherwise, it happens that we see more and more, and that led to these despicable attacks, I mean misunderstanding and so the feeling of aggression.
The reactions among young people from high schools, are rejecting the attack, but above criticism and misunderstanding of caricatures. Nobody explained to them what they are for, what they mean, and that they have a reason to exist. They do not see social criticism. They only see that aggression against religion.
The caricatures about Islam, do not try to hurt Muslims, nor to criticize Islam or the Prophet. They are excessive? It's possible. But they only denounced the warlike interpretations that are made of sacred texts, and extremist drifts that occur in the world.
The problem is that a caricature always has a target, and that target is not going to enjoy.

Our society is weakening because it has given up, for many years, to teach its own foundations to children. It educates, it teaches science and languages, but it doesn't teach them any more over the basics of the life in society.

When I was a child, in elementary school, we had moral lessons. It was about the ways to be polite, to say hello, to respect the elderly, to respect differences, in short, to behave in the society.
Later, in college, we had civics courses. This was the basis of the institutions work, what is civic duty, why we must vote, what are the laws, etc. In short, the operation and the social values of our society.
It was in the last century. Should we conclude that there has been progress in this direction?
The latest events show us, if it was still necessary, that no. Not only there has been no progress, but on the contrary, our societies regress in terms of tolerance and social and civic behavior. At the same time, religions, political parties, trade unions and extremism of all stripes have taken over.
There is a long time that these values are not transmitted in the majority of families any more. The basics of social and civic behavior are transmitted through private lessons, often partisan or sectarian.
Who teaches the values of democracy, of freedom?
Who teaches morality and social normality in order to see and understand what are drifts?

The state must take control again on the civic education of its citizens. School has a fundamental role to play in the education of tomorrow's citizens. The scope and consequences of all these ideologized teachings, will always be lower if children who receive them, also received a civic training, tolerant and without ideological bias.

Here in Spain, a few years ago, held a violent societal debate about the relevance of adding to the educative cursus, a formation about citizenship. It was established by the Socialist government of the time, and then eliminated by the following Conservative government.
This program was not well prepared, too partisan on some sensitive issues, but I regret that instead of deleting it, the Conservative government, now in power, has not taken the time to reform it. The Spanish society has, till now, less suffered from sectarianisms of all kinds. But what will happen tomorrow? The drift observed in France and in other democratic countries, will probably occur here too.

I firmly believe that the EU should require member countries to include social and civic education in school curricula, from small classes.
This is one of the best ways, without violence and with a long-term effectiveness, to reduce the risk of sectarian aberrations which we are currently witnessing, which seem to strengthen.

Today I took part to the silent march, here in Seville, to mark my horror at these barbaric acts.
But this march, like all others, across France and the world will be useless if no one is aware of the existing malaise and its causes, and if no one puts in place the means to (re) develop a high quality social and civic teaching. 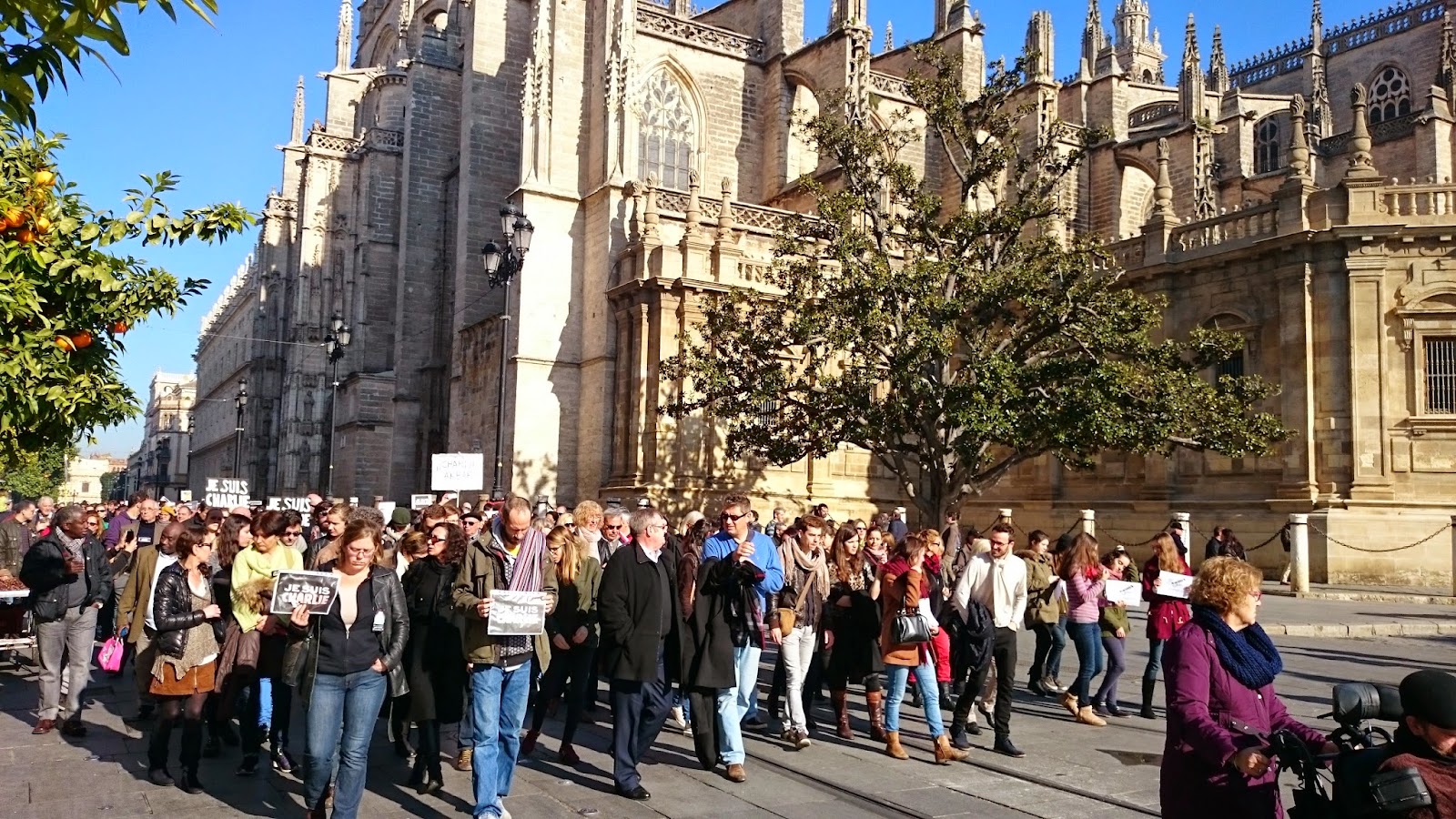 Yet there will always be a shadow over these support movements, the shadow of recovery.
Today, in the great march of Paris, were present more officers or senior representatives of governments that impose in their respective countries a strict control of the press, and that struggle at the institutional level against freedom of thought, freedom of the press and freedom of expression.
What should we think?
Political recovery or statement of intent?
CARICATURISTS, TAKE YOUR PENCILS!
Publicado por Christophe Bouchet en 20:44