Agriculture, by definition, is subject to the bad weather. This has always been the case and it is an integral part of the activity.
We know that at any time we may have a problem caused by the bad weather. Possible causes are many, and possible consequences are even more numerous. The same cause can have diverse consequences.
In itself, this is not really a problem. We know this is a sword of Damocles hanging permanently over our heads as farmers.

But to this fact, a priori trivial, was added a problem that greatly aggravates the consequences. I mean standardization.

The forms that take the bad weather and their consequences are very varied. I decided to do a series about them, that I will feed from time to time.

The first episode does not really have a name. I called it "uglyness" because of its consequences. This is a non cataloged phenomenon, and the afterwards analysis shows that it should be classified as damage from bad weather, but unexpected kind.
Its consequences directly enter in the category that was the inauguration of my blog: loss of food. Review if you want, my post number 1 ("food waste", January 2014). 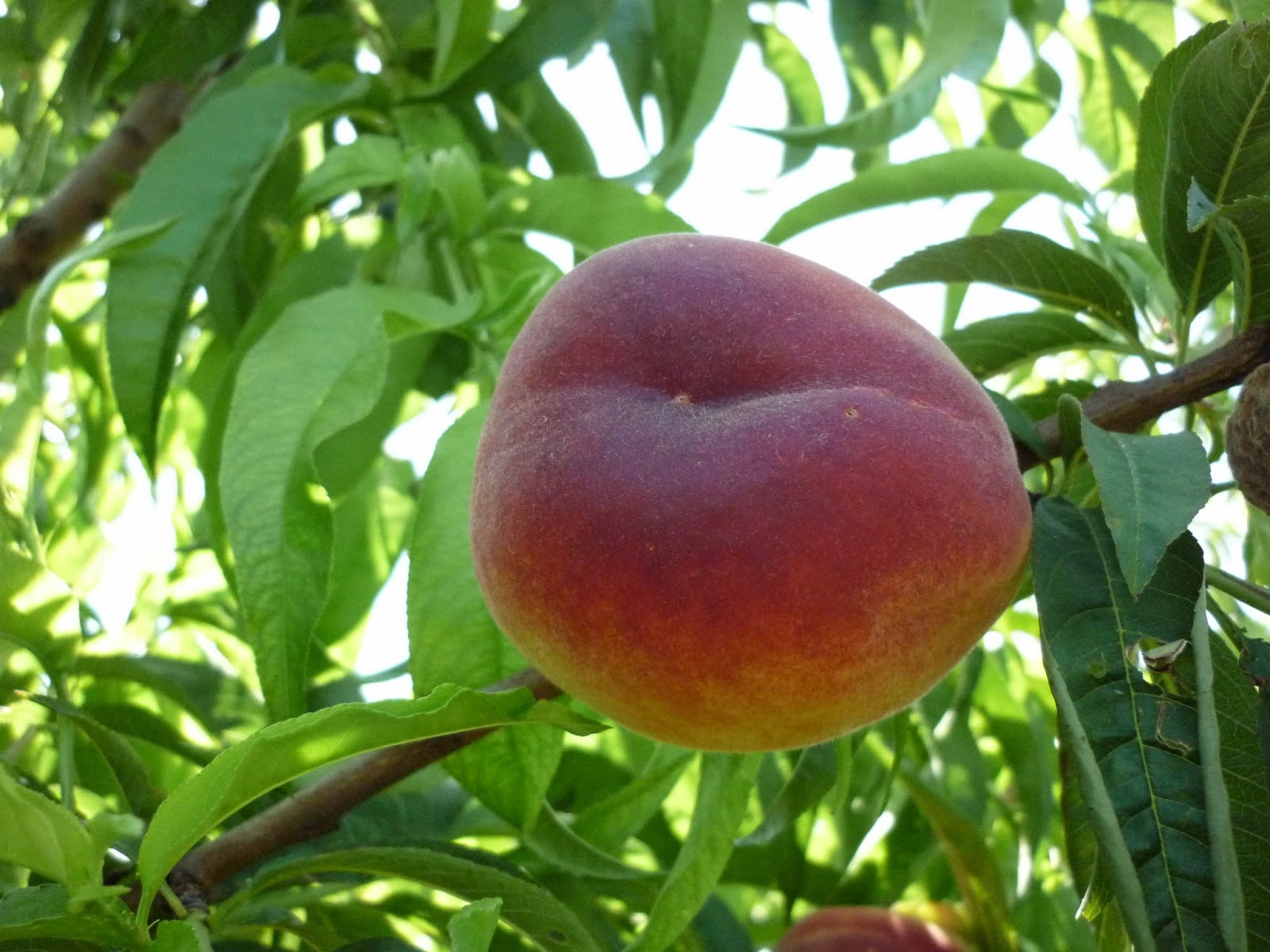 Here is a peach variety, a bit outdated because of its presentation (the market evolution goes to 100% red fruit, which is an aberration, and it is not going better) and above all, which tends to escalate over the years. Specifically, it tends to have discoloration around the mucro (the pistil point, somehow the peach navel). This is a problem that I call cosmetic type, since it only changes the appearance of the fruit, not alter in any way its intrinsic qualities.
But the current standardization attaches more importance to aesthetics than taste.
Well, so far, nothing special, except that in the selection of new varieties, it is generally more important to choose a beautiful fruit that a good fruit. 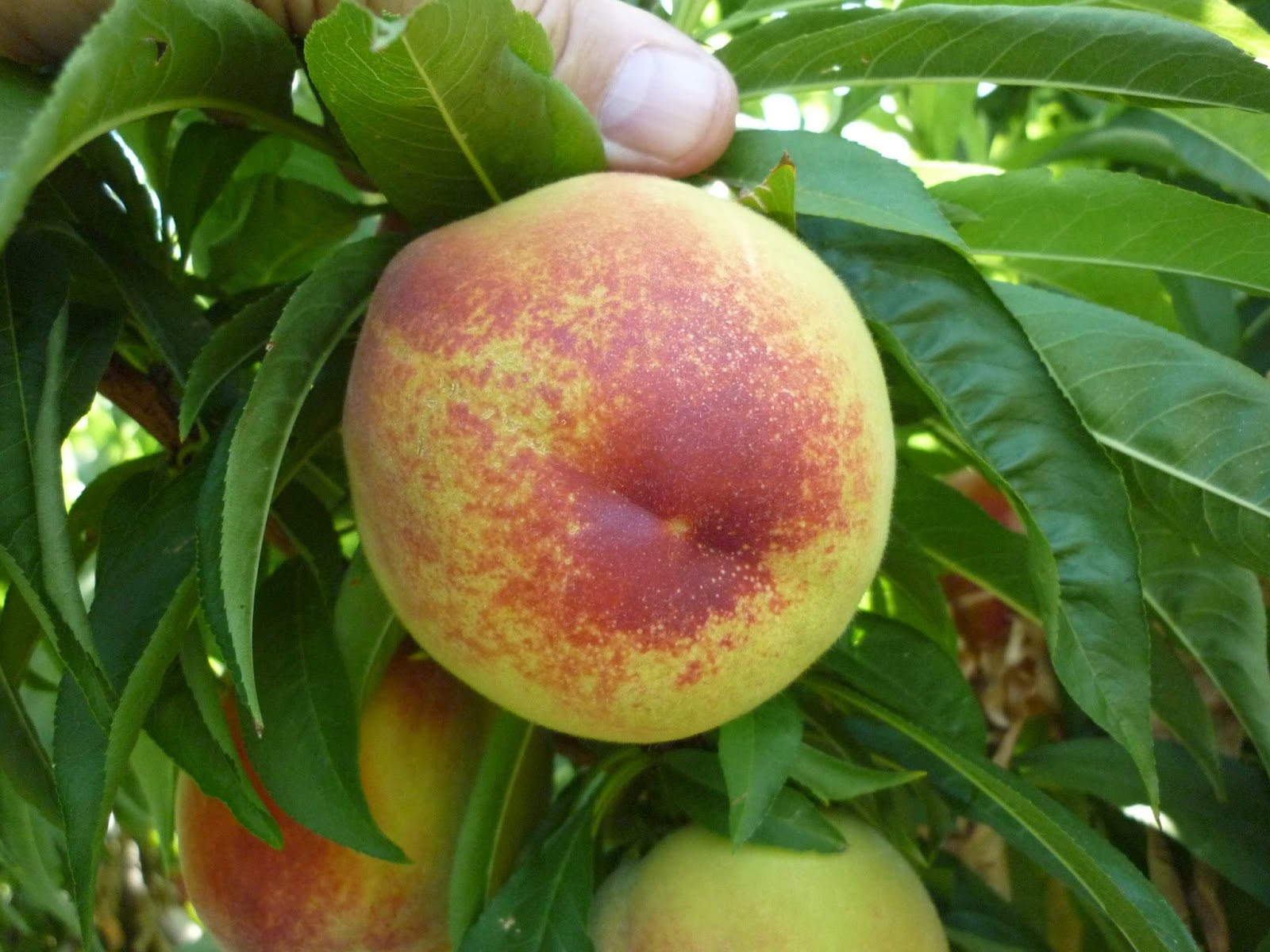 Where the situation worsens, it is when the weather gets involved, and in addition, as is the case this year, the market is hard.
Look at the following pictures, you can see the consequences, on this variety, of a prolonged rain and moisture period, after blooming period, key moment in the development of young fruit. 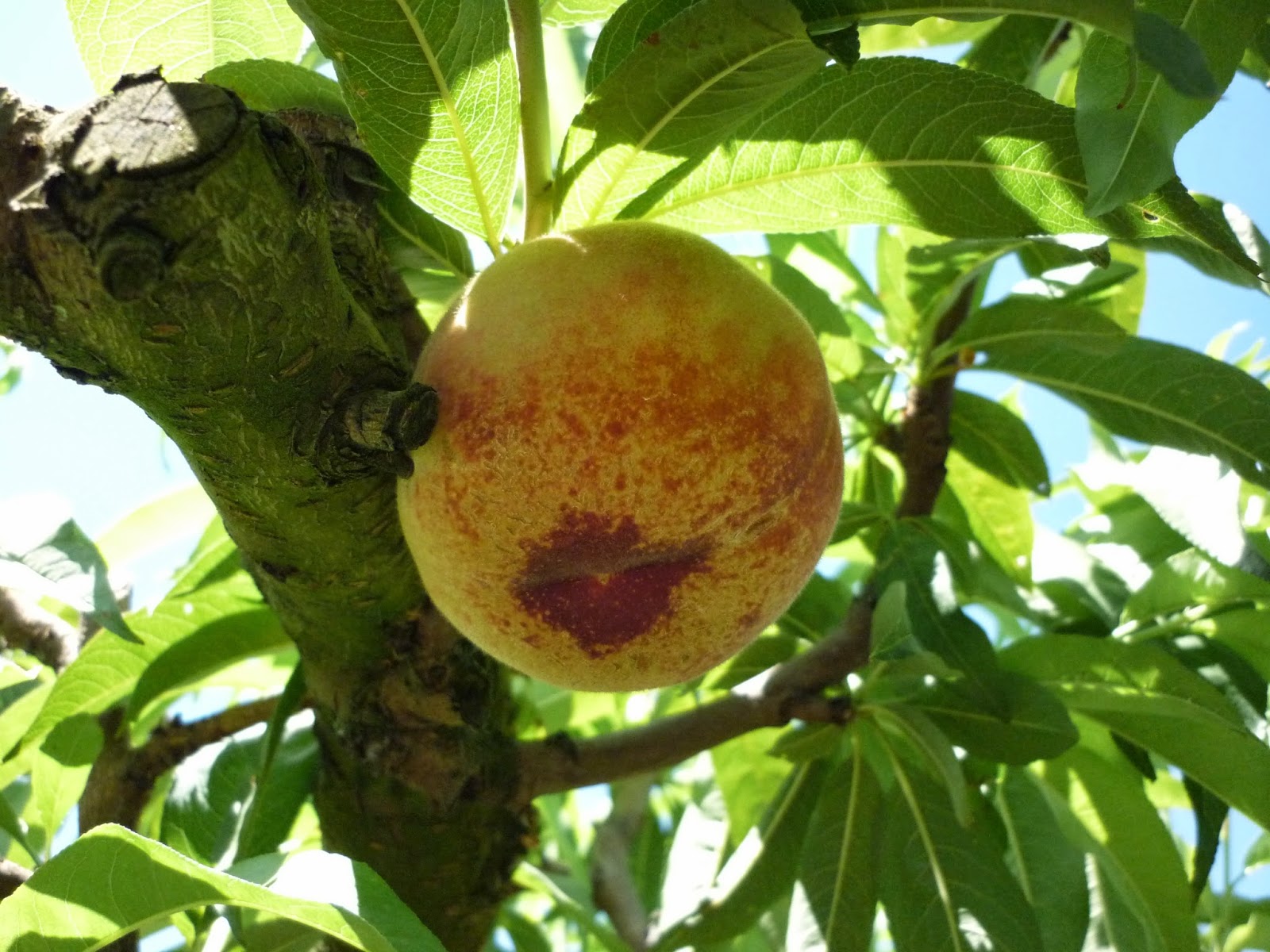 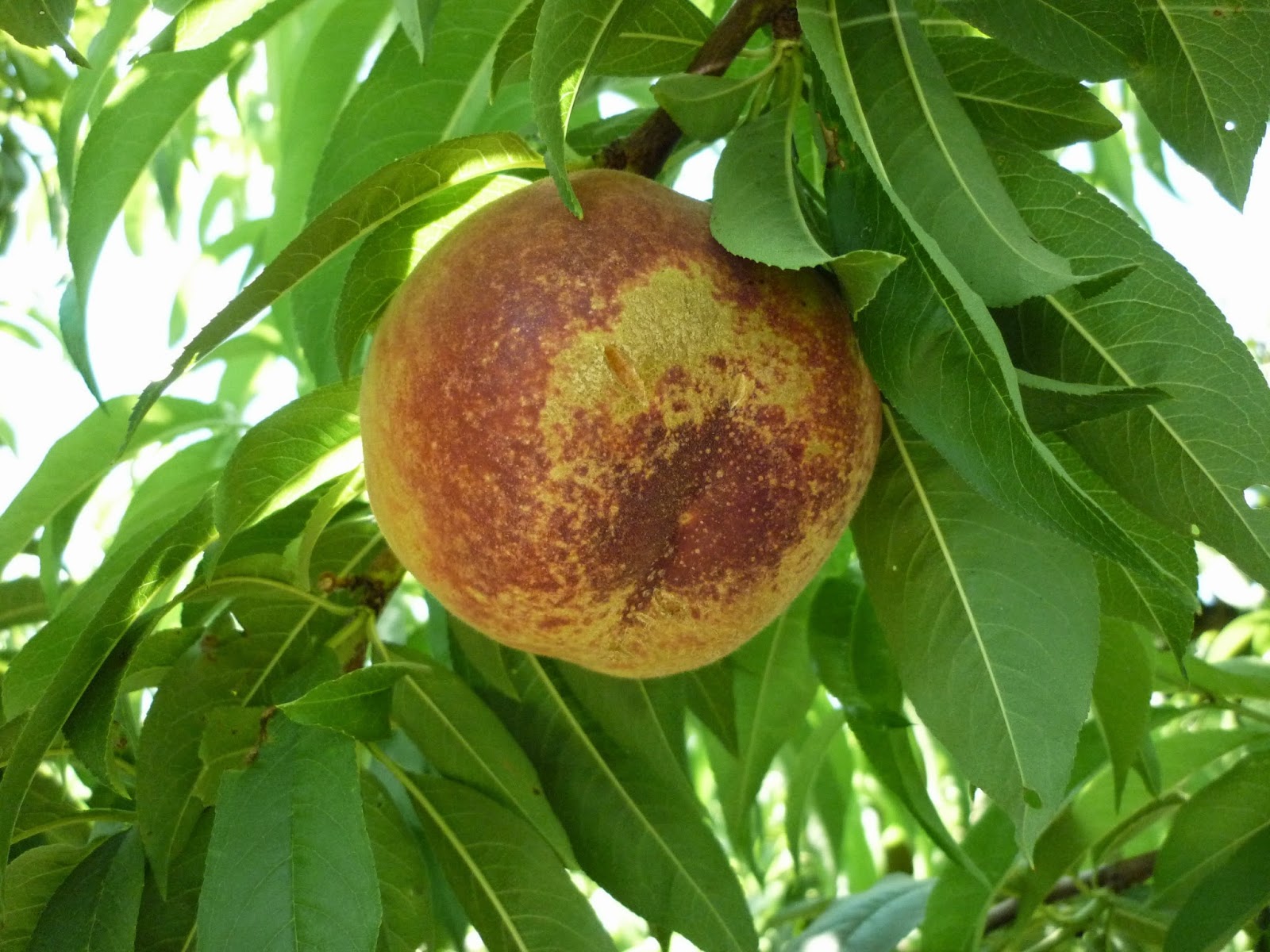 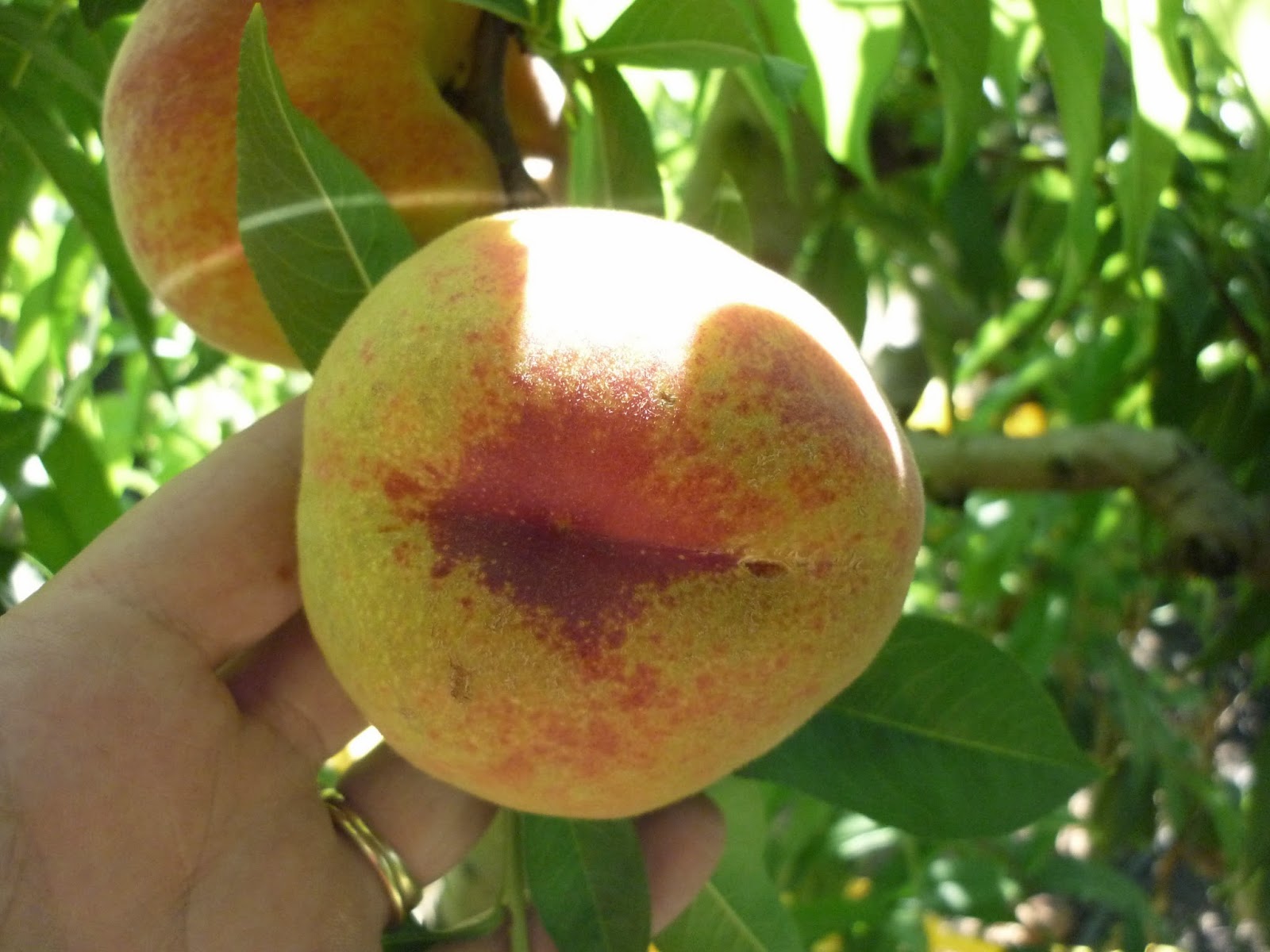 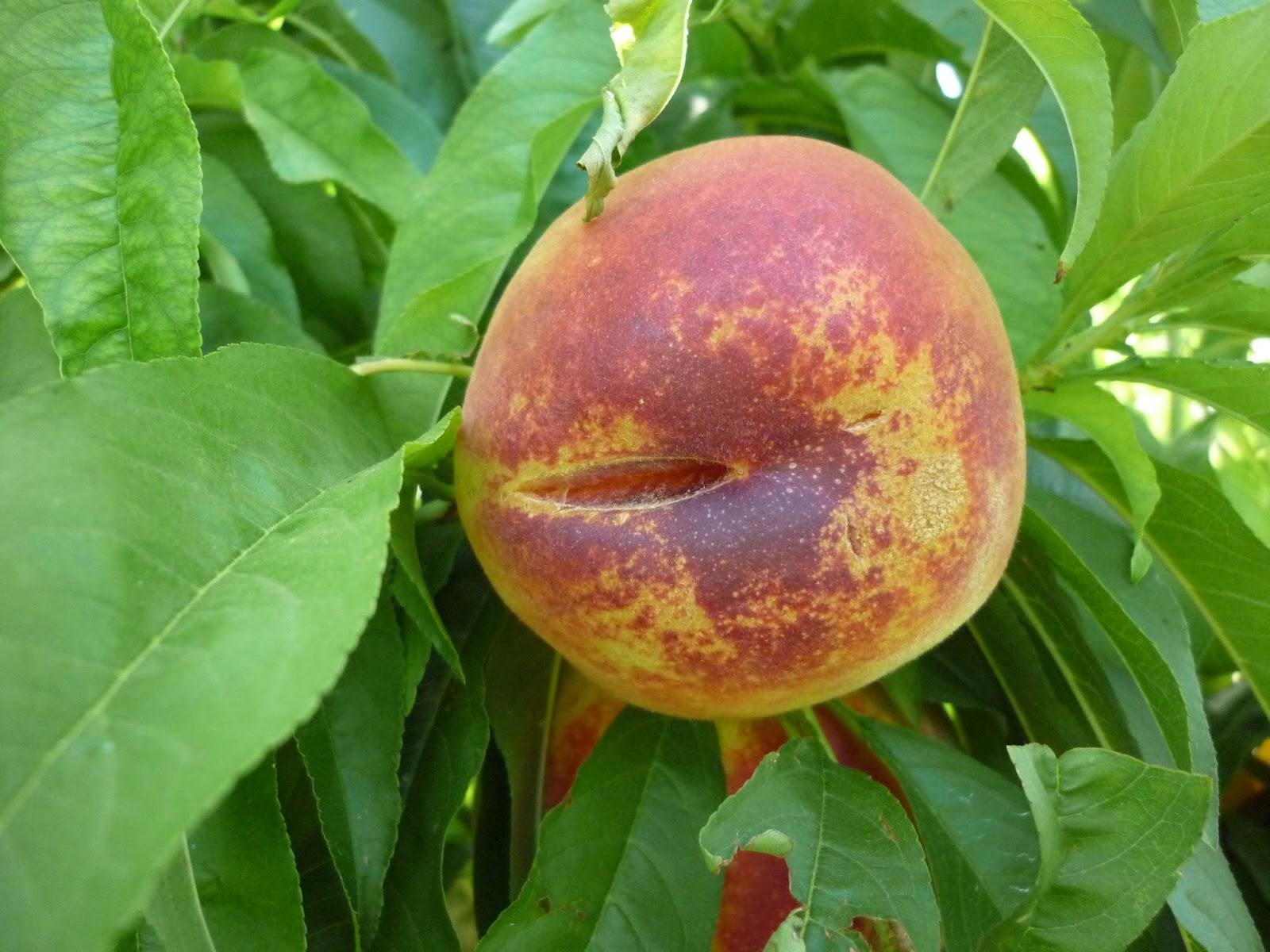 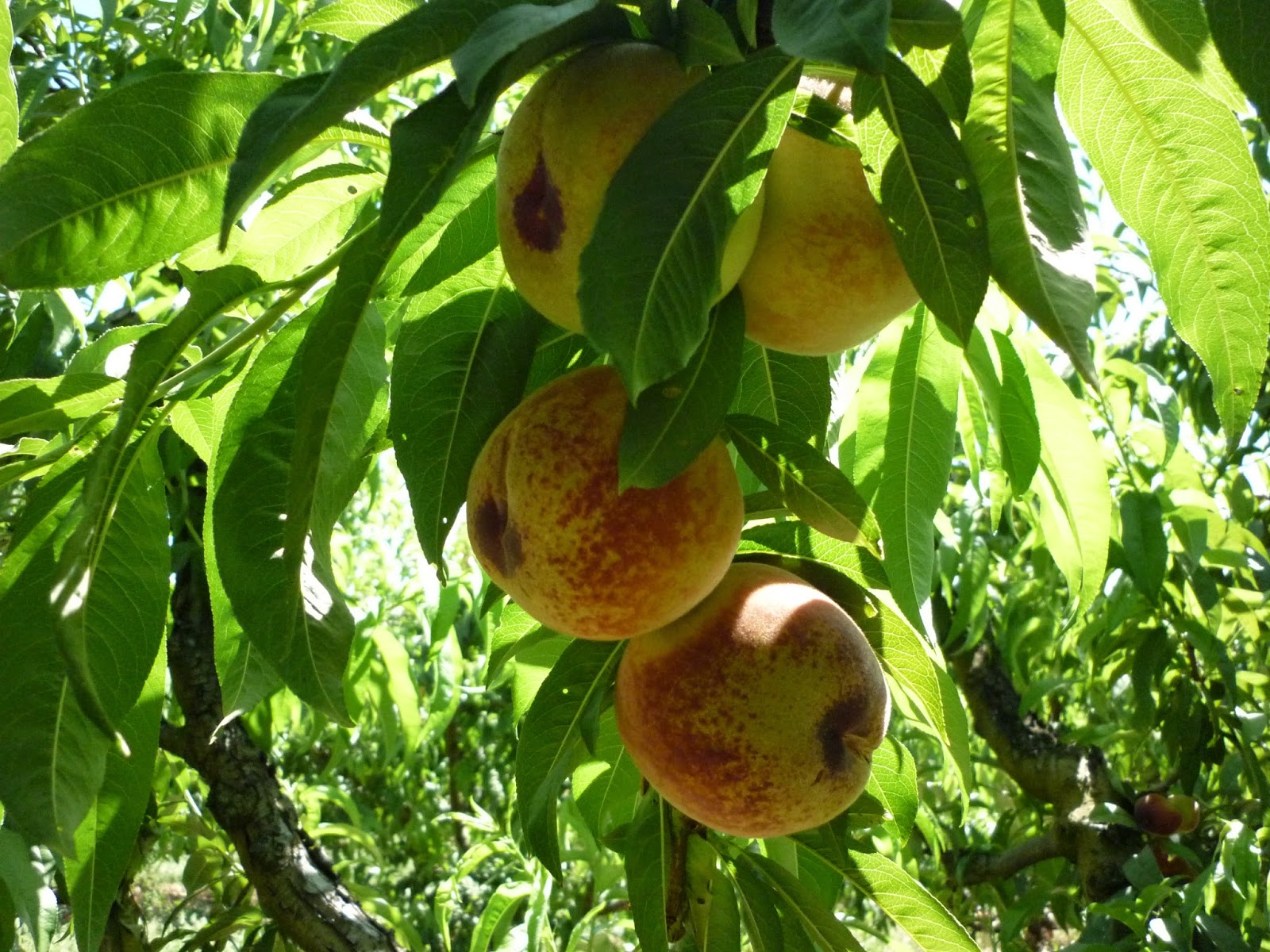 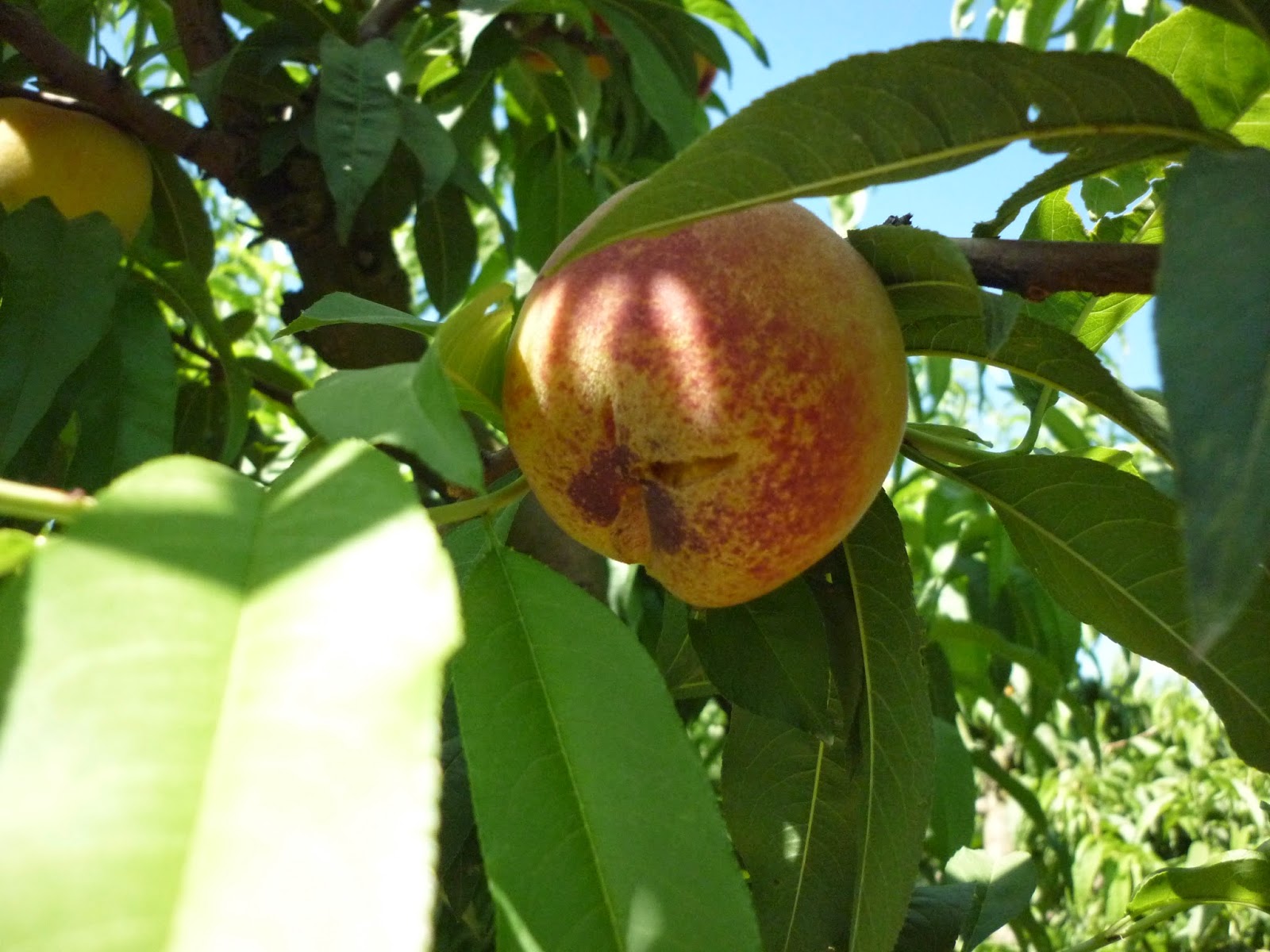 The majority of these fruits have a simple appearance default. But they will be sold, at best, as second choice.
Yet this year's market is difficult (high European production and low consumption), the second choice hardly finds a buyer. Prices of first choice fruit are very low (which has nothing to do with the price you can pay at the retailer’s), and the second choice mainly goes to industry (9 cents per kg, which must be deducted transport), or directly to the trash.
However, these fruits have all the qualifications, apart from the look.

Do you remember my post "portraits of flowers" (No. 8 March 2014)? The last picture is the flower senescence. Then begins the phase of fruit development. It begins within the calyx of the flower, stripped of its petals. Then comes the moment when the young fruit must get rid of the calyx, which could hinder its development. 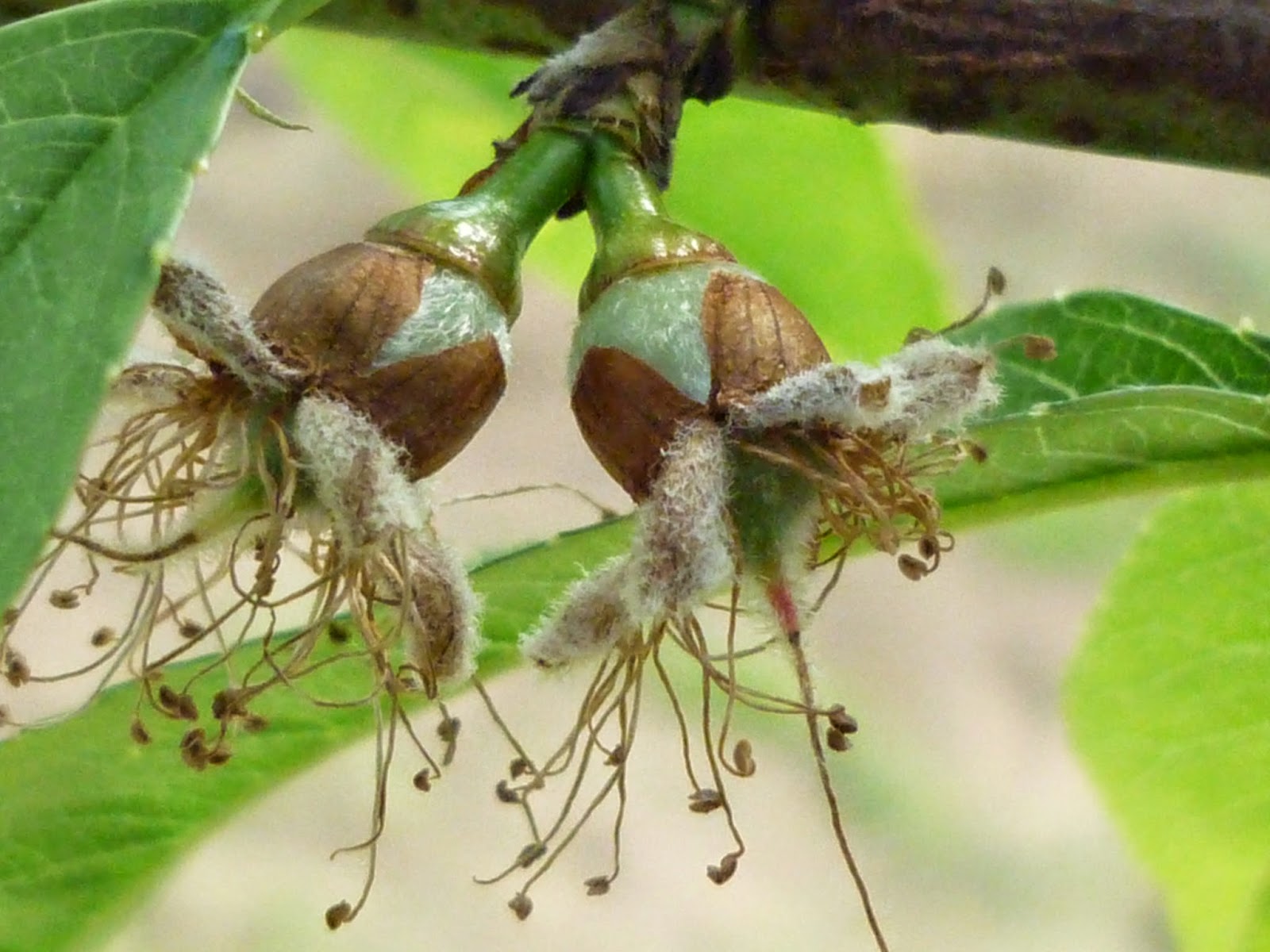 It is this phase that is especially sensitive because the skin of the fruit must move from a protected position an exposed position, and to do this, he must become stronger. But if during this very delicate phase, the fruit is under stress, it can keep serious sequelae.

The peach harvest, when seeking a high level of quality, is achieved in several stages, in order to monitor the timing of fruit ripening on the tree. Specifically, we usually pick in 4-7 passages, depending on the variety and according to the situation. When the harvest ends, there is still some fruit on the ground, between 10 and 20 fruits per tree, because of accidental falls, excessively mature fruit, too damaged to be sold, or sometimes fruit rotten on the tree.
This gives the following result. 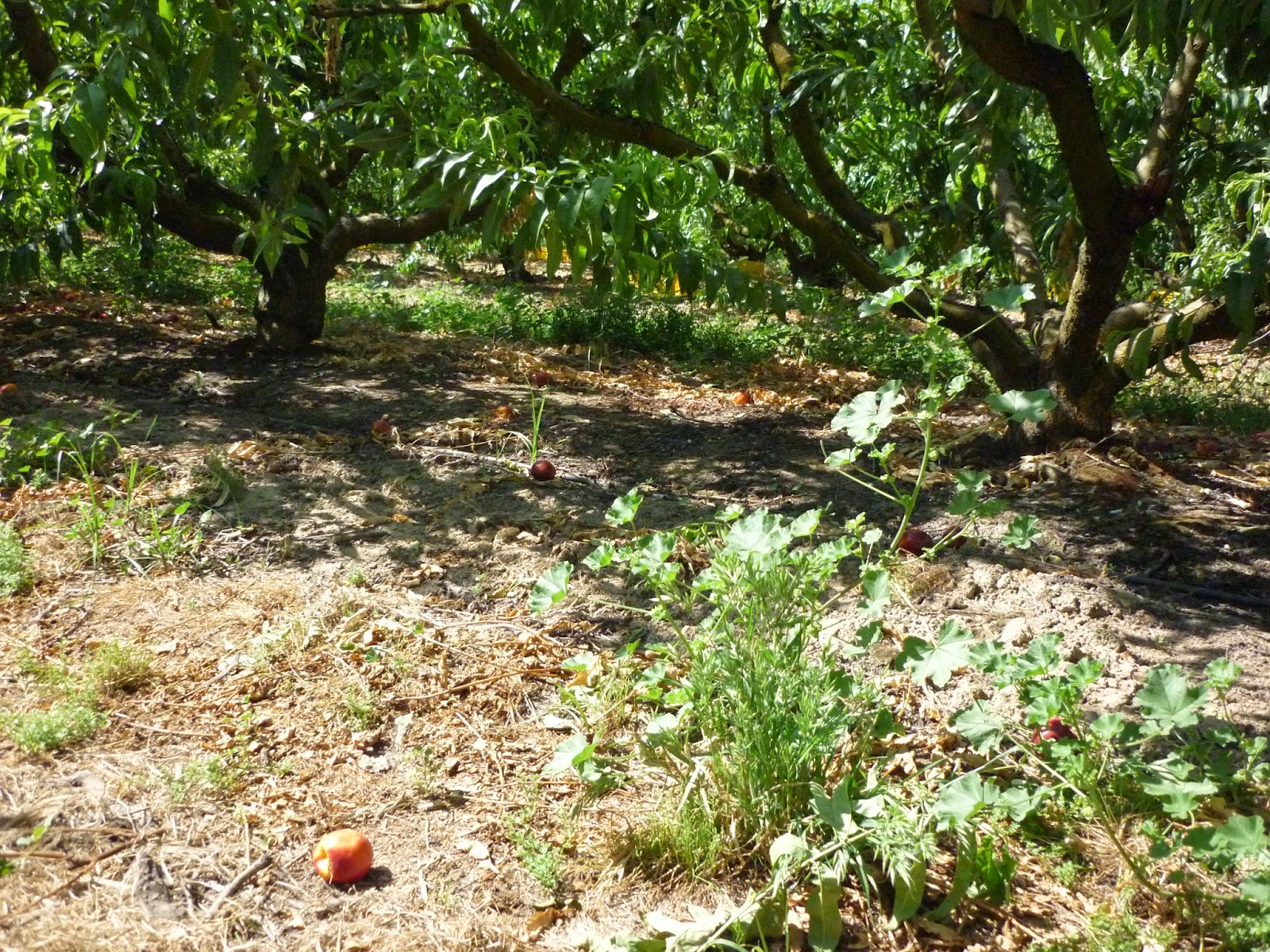 But in this case, that prevented me from sleeping this year, the amount of unmarketable fruit was such, that we had to throw on the ground a large part of the harvest. We even had to take the painful decision to abandon the harvesting of certain areas before the end. With despairing result you can see.
One year of work to get to that! 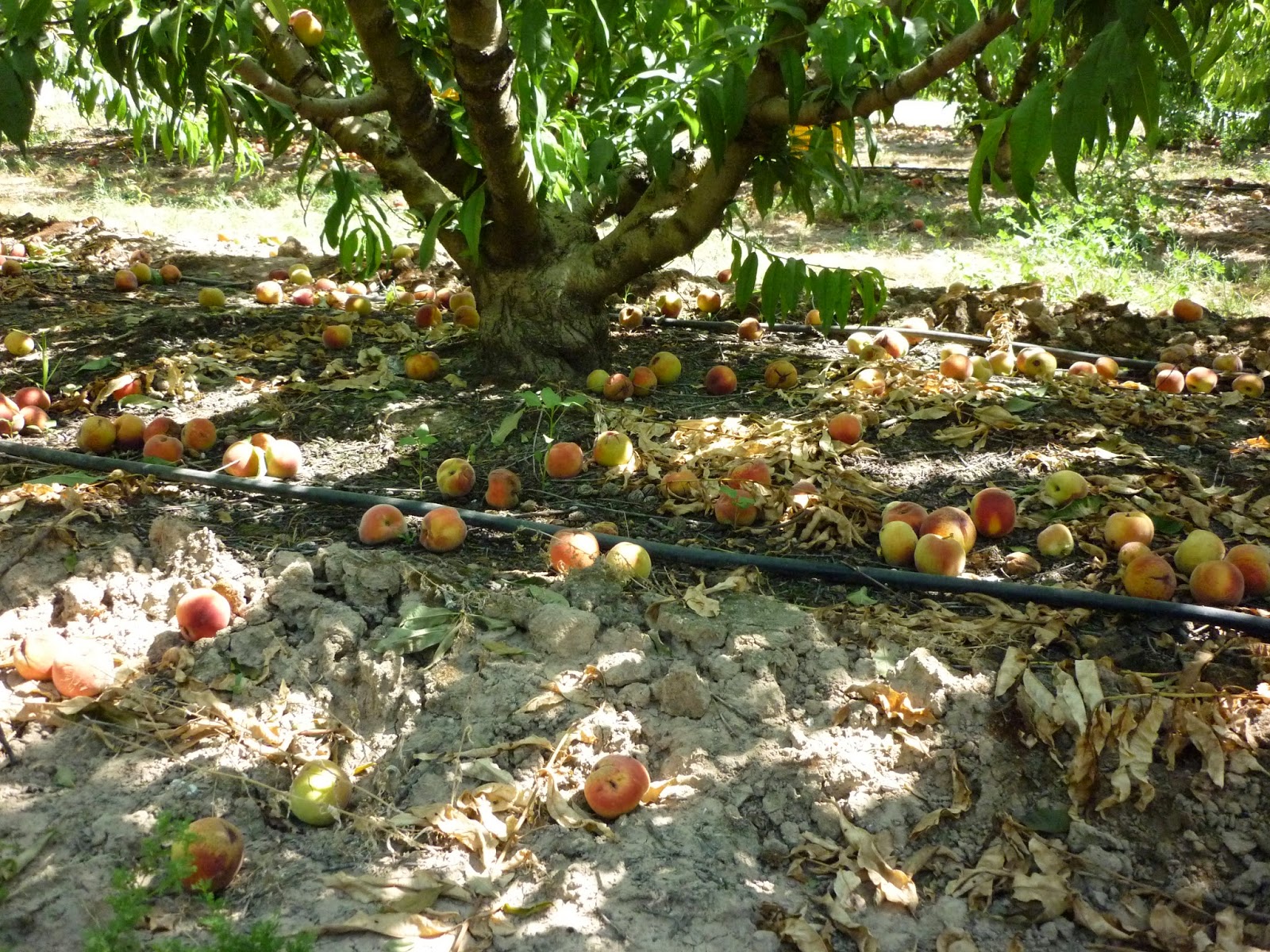 And this, not to mention the extremely tough selection made in the packhouse station after harvest.
And not to mention complains in destination. Because when fruits are "clean", the packing work is easy, and there is little problem. But when the fruit reaches the orchard with so many problems, packing errors are more numerous. And as long as the market is difficult, any excuse is good to renegotiate the price, once the fruit arrived to destination.

Finally, for a company, it is a disaster, a blow which it is difficult to recover as long as the variety in question is one of the pillars of the campaign, as is the case.
I did not have the final numbers, but I think that this variety, sales revenue will not cover more than 30% of costs.

So when I hear, or I read some comments that farmers treat their crops by pure profit motive, it makes me boil.
The farmer sprays to control the elements on which he may have an action, knowing that uncontrollable elements are much more numerous. It seeks to ensure sufficient income to cover its crop. He simply acts as any entrepreneur, from any economic activity.

Because in a situation like the one I described, the losses are immense.

Let's just hope that the end of the peach campaign, is able to offset these losses, in order to at least balance accounts.