At last a truly lighter subject. A kind of playtime before talking about other difficult or unpleasant subjects, I still have a lot in stock...
Let's talk about ancestral techniques, more than ever actual.
What's this?
It is a technique invented by the Chinese civilizations, 3000 years ago and introduced to occident  by the Greek civilization. Aristotle speaks about it with many details in the 4th century BC.
This consists of forcing the sealing of a bud or shoot of one plant to another plant. We name bud o bud wood the aerial part and rootstock the underground part or root system.
Once the graft sealed, we let it grow, removing shoots that the rootstock naturally produces, to  force the bud wood dominance in order to allow each the role it was given. Thus, the plant develops from the bud wood, with a root system from the rootstock. 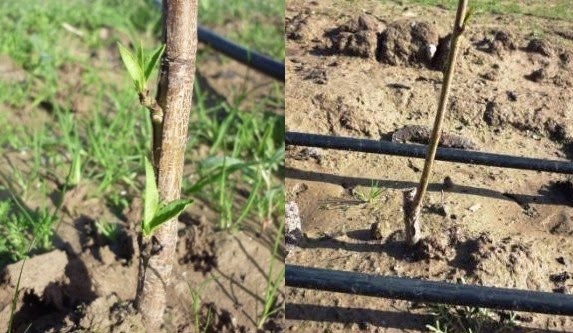 In some cases, the rootstock rebels and produces "suckers" aerial shoots from rootstock roots or collar, which have to be removed because they tend to form another plant beside, which will create a very direct competition with the crop. The collar is the point of separation where the underground wood changes its root structure to become aerial wood. 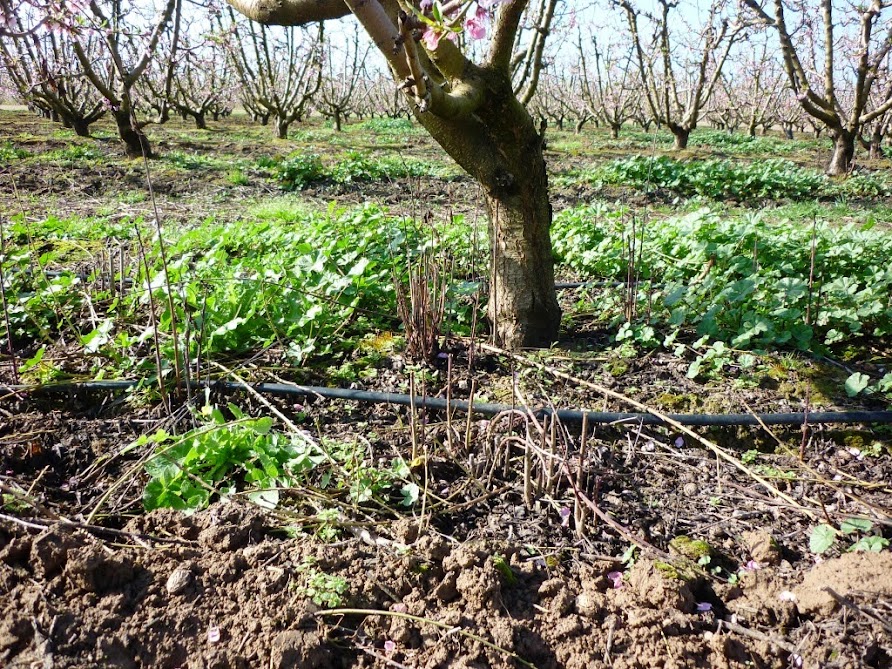 Here a peach tree whose rootstock, plum type, produces many suckers. We have to remove them because they could weaken the tree by a nutritional competition effect.

It’s only possible to graft mutually compatible plants. The technique is used for immemorial time in vines and fruit production. It is also used for a long time for some ornamental species such as rose. Since the 50s, it is also used on various annual crops, especially cucurbits such as melon or squash or Solanaceae, such as tomatoes.
A lack of compatibility (also called affinity) will result in a risk of break at the graft union (it is the case of apricot on myrobalan plum), or in a coarse callus reflecting poor vascular communication between rootstock and variety (with usually a poor growth), and in the case of total incompatibility a graft abortion, or rapid death.

On the left slide, this peach tree is grafted on a hybrid peach x almond. The graft union is almost perfect. It is barely noticeable, visible only with a slight difference in appearance of the bark, but without any difference in diameter.
In the center, a plum tree grafted on a peach rootstock Monclar ®. Affinity is not perfect. The graft callus is marked. However, the development and behavior of trees is satisfactory. The strength is likely reduced which, in this case, is an advantage.
On the right, a tipical case of poor compatibility. The tree is barely viable. This is an experiment. From 5 trees, this one is the only survivor. It is obvious that this rootstock is not valid for peach tree.

What's the point ?
This technique is primarily used to adapt the crop to the soil on which we will install it. There are resistant rootstocks to calcareous conditions, to water excess sensible soils, to compacted soils, etc. .
Then, it is a contribution to the adaptation of the crop to unfavorable climatic conditions. There is thus rootstocks resistant to drought, which better support cold soils, or on the contrary very high summer heat, or the lack of dormancy in climates like Seville’s one.
It is also a great mean of prophylaxis. That is to say that it is the best way reduce or eliminate the effects of some parasites. The most famous case is the vine, whose European varieties were saved fron phylloxera by grafting method. The great phylloxera crisis began in Europe in 1861, but still remains active in some areas of the world where this aphid has recently arrived on ungrafted vines. In fact the American rootstock used, does not allow the aphid to complete its cycle. It is unable to install. 100% efficiency without any treatment.
Similarly, there are nematode-resistant rootstocks (microscopic worms from the soil, against which available insecticides are  insufficiently active but extremely toxic), others are resistant to certain soil fungi, as phytophthora on citrus, and so on.
Finally, there are purely agronomic criteria, which allow to select a rootstock for its effects on the vigor (the most common case is the apple), on fruit quality, productivity, on the ability of the fruit to conservation.
Each species has a more or less wide range of rootstocks, that allows adapt to diverse culture conditions, according to the place or to the farmer priorities. For example, if a phytosanitary problem such as nematodes is determined or known, it will be the priority, because it may affect the viability of the crop. If there is no imperative of this type, agronomic criteria will logically be the priority.

Attention, we can not do anything. Depending on the conditions, we will be able to adapt a crop through the choice of the rootstock, or not. Insist on planting an inadequate and inadaptable crop is going directly to a technical, so economical failure.

There are a few breeding programs worldwide, to expand the range of rootstocks of different crops. But it is a long and tedious job, which requires many multisite experiments, whose results are slow because it’s necessary to see old culture at least up to the age where it pays the investment. Variety hybridization is much faster and cost effective. The majority of hybridization rootstocks programs are run by public agencies, which do not need to place profitability as a priority. Because if this is the wrong variety, you always can top graft the orchard. It is expensive, but it may be sustained. But if you chose the wrong rootstock, you have to tear all off.

Is it possible to graft anything on anything else?
Of course not. However, there are some compatibility between species, but always within the same genus. One of the most used in pear rootstocks is the quince. In the Prunus family, the intercompatibilities are many, between plum, peach, apricot and almond. 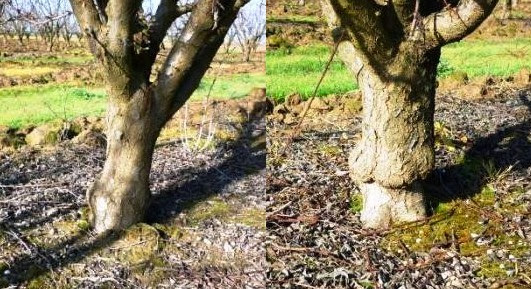 On the left slide, a plum variety grafted on peach Monclar®, with good affinity despite the difference in diameter, as the graft callus is perfectly healthy and clean.
On the right, another same aged variety. This is the pollinator of the previous one, on the same rootstock. It is clearly visible that the affinity is reduced, because the graft callus is much bulky, showing a vascular communication of lower quality.

May grafting act on the fruit quality?
Yes, and it is often a criterion of choice of the rootstock. Let’s take the case of apple trees. Most old orchards are grafted onto vigorous rootstocks, which tend to cause a strong tree vigor. Modern orchards are almost always grafted onto rootstocks greatly reducing the vigor, often requiring to stake trees, whose structure (trunk and branches) is not able to support alone the fruit crop without break risk. Debilitating or dwarfing rootstocks generally tend to improve fruit quality and size, provided that the affinity is good, and that culture conditions are appropriate. Indeed, a small tree sends nutrients directly to the fruit, while a vigourous tree directs them to the strongest shoots, also called sucker, to the detriment of fruit.

Techniques and periods for grafting are many, and each crop has its preferences, and each technique has its tricks.
These are very delicate operations requiring proper training and necessary precautions to ensure success.
It is surgery applied to plants.
Publicado por Christophe Bouchet en 18:15