71- Plants have the floor

PLANTS HAVE THE FLOOR

On February 24, I attended the annual meeting on irrigation scheduling in agriculture, organized here in Seville, by a local company dedicated to new technologies applied to irrigation, Optiriego (some free advert cannot hurt). 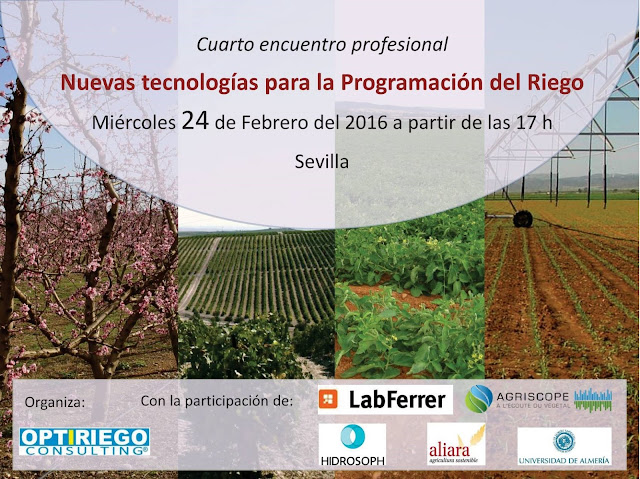 It is quite interesting to observe the evolution of the possibilities offered by new technologies.
When I entered the profession in 1983, the great novelty for irrigation management was the tensiometer, a small device filled with water placed in the soil, which measures the availability of water by measuring the suction force necessary to extract it. From this force, we deduce the energy needed by the plant to absorb water.

This tool, still used for its high reliability, but whose usefulness is limited because of its lack of practicity and versatility, supposed a revolution in the management of irrigation. At last we were able to objectively measure the water availability in the soil.
Until then, the farmer was monitoring soil moisture with a kick in clods or scratching somewhat superficially. A few people were using a manual auger, allowing them a subjective, slow and painful assessment of the moisture at the roots.

A few years later, appeared probes of different types, all intended to measure the soil moisture. All these probes are still in use and have allowed great progress in rationalizing the use of water in agriculture, and reducing wastage of fresh water.
By combining these sensors with more modern irrigation systems, the actual water consumption has been reduced by half or more.

At the same time, some slightly offset researchers were trying to invent sensors capable of measuring plant response.
Over time, these inventions, long left as mere research tools or a little wacky inventions, either by their complexity of use, either by their cost or by the difficulty in interpreting the information, gradually managed to find their place in the farms.

This is, for example,
-       Information available at the field, farm or region scale, using remote sensing satellite, plane or drone, that allow an assessment of crop conditions and crop regularity
n  Infrared photography,
n  Thermal cameras which provide information about the photosynthesis or the foliage of the temperature,
n  Other systems by ultraviolet, ultrasonic or other, that measure the state of underground water tables, or learn about other types of measurement plant.

Photo Farmstar-expert (French business consultancy in agriculture)
-       Measurements taken at the level of the plant, such as
n  Photosynthesis sensors, which inform of the state of the plant by measuring photosynthesis variations,
n  Sap flow sensors, which measure the velocity of circulation of the sap in the trunk,
n  Dendrometers that measure micrometric variations in the diameter of the branch,
n  Or other pressure chambers, turgor sensor, etc. 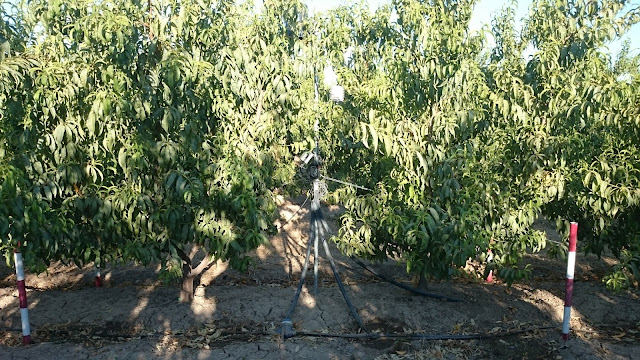 This control station in an orchard measures temperature, humidity, rainfall, water flow and hours of irrigation, soil moisture at three levels, and the reaction of the plant through a dendrometer on branch and another on fruit. 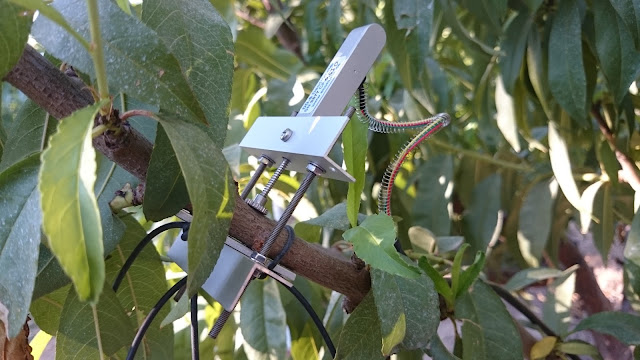 A dendrometer on branch

Until then, the farmer was observing symptoms that allow him to know approximatively if the plant was fine, with the defect that in most cases that when the symptoms appear, the plant is in a delicate situation from quite time, and sometimes irreversibly.

These technologies can detect problems in the plant before it externalizes them, and also allow the farmer to understand how the plant reacts to cultural practices, thus adapting.
As agriculture, by definition, is interested primarily in the production, the first consequence of the responsiveness that give these technologies to the farmer is an improvement of productivity without a need of more inputs, quite the opposite, applying them at the right time, at the right dose and the right place.
These technologies allow to increase very substantially the agricultural sustainability, improving the efficiency of all its practices, by converting them in productive and qualitative performance, accompanied by a reduction of its environmental impact.

When one is a farmer, as is my case, and has the nose every day in the daily management, or one is, as is the case for everyone, a consumer more concerned about what is put on his plates, that by the problems of those who do it, one does not necessarily see the scope of these technological changes.
In fact, all these sensors and systems open up a new path of development of agriculture. It's even more than that, it is a genuine revolution, discreet and silent, but with an uncommon reach.
This is the first time in the history of agriculture (that is only the last 12,000 years!), that somehow is given the word to the plants.
The plant is our production facilities, we ask it to produce more and better, but we did not know or could not take account of its daily reactions, primarily because there were no direct measure means. We measured the soil and deduced the behavior of the plant, or we weighed the wood eliminated by pruning, and deduced for the following year, the measures to be taken.
But we are now able to understand at least part of what the plant says to us, and take it into account in the daily management.

We are giving the floor to the plants.
This is a really profound change, which influences not only on farming techniques, but especially on the intimate relationship between the farmer and the plant, so the mentality, which is much more difficult.

I tell you, this is a revolution!