ONE NIGHT ON ALERT

This February 16th, forecasts announce a risk of frost for the next night. Alarms are set to call at + 1ºC. In orchards, everything is ready to quickly intervene if necessary. People are warned that we might need them at any time. We call those who agree, starting with those who live closest to each farm. They are used to that, this is not the first time that it happens.
I plan to sleep early, or at least, to try it. It must be said that here in Andalusia, to bed early is not a usual concept and it’s difficult to implement.

11:25 pm: My phone is already ringing. I usually do not sleep with it, but in times of risk, I must be reachable 24 hours / 24. The night has been really short. After a kind of nap of just over half an hour, I have to get up. This is the orchard manager of a farm. The alarm just rang. I ask him to have a look to all plots awaiting my arrival. There is at least one thermometer in each risky plot, sometimes more. 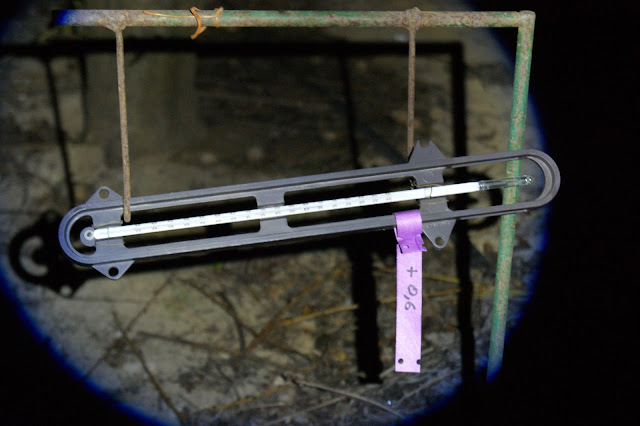 11:40 pm: I leave my house. Just the time to jump into my clothes. In times of risk, "frost special" clothes are always ready. We must be able to react very quickly. It is better to stack the layers. The night will be long and cold.

11:55 pm: I arrive on the first farm. At this hour, the traffic is fluid, I don't waste time. My colleague arrives at the same time. He will stay on this farm all night, to make decisions and to call the staff for lighting paraffin cans. My other colleague went directly to the third farm. All alarms have called in an interval of half an hour.
First work, take a look at temperature records. It continues to decline.
I still have margin. The alarm is set to call about 2 degrees above the ignition temperature of the most sensitive plots. It gives in principle enough time to react.
I take a walk in the orchard. I love those nights. The sky is always beautiful and there is usually not a breath of air. One night, okay, I love it, and it's actually quite pleasant, despite the stress. But it must not exaggerate, I am clocked to sleep during night! While more than 20 nights, as was the case in 2012 or 2005 ... it's quite a trouble!
We make a round of control every 20 to 30 minutes while we're away from the dangerous temperature. As soon as we approach, we tighten the rate to 10 or 15 minutes.

0:20 am: On the second farm, things start to rush. I'm leaving in a hurry. I chose to take care of this one for three reasons. On the first hand it is a usually cold farm and quite complicated for frost management. On the second hand, this is where there are these days most sensitive surface. At last, the orchard manager is new and inexperienced for such situations.
There are many days that we speak of the organization to have, but I've probably forgotten things. I prefer to be where things are likely to be more complex.
As soon as I arrived, I review the temperatures. It continues to decline. The dew point is at -4ºC. This night promises to be lively (the lower the dew point, the lower the temperature may decrease, till the saturation of the air by humidity and dew formation). The most sensitive parcels must be lit to -1ºC.
In addition, on this farm, the wind doesn't stop blowing. It seriously complicates matters because it reduces the quality of protection and therefore it increases the evaporation of plant, so its sensitivity.
The higher is the evaporation, the lower is the internal temperature of the plant, and more the damage of frost is potentially serious. A frost with a dry air will always be more serious than the same frost with damp air.
The night will be hard.

1:10 am: it becomes dangerous. I call the staff. Yes, this technique has advantages, but it requires a lot of staff. Those who live closest arrive 20 minutes later. They know where they have to go. They light a large fire awaiting orders, to keep warm. A pile of wood was prepared on each holding point. 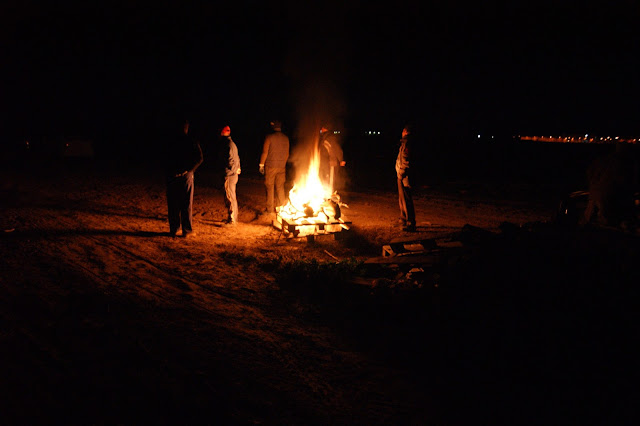 Video made by Roberto, tractor driver of the company, in february of 2012

1:45 am: the ignition temperature has been reached in a plot. I do a first lighting of every second can, every second row. We must stop the temperature drop as soon as possible. In 10 minutes, 8 hectares are under protection. We monitor thermometers. They stabilize quickly. The staff returns to the holding points. 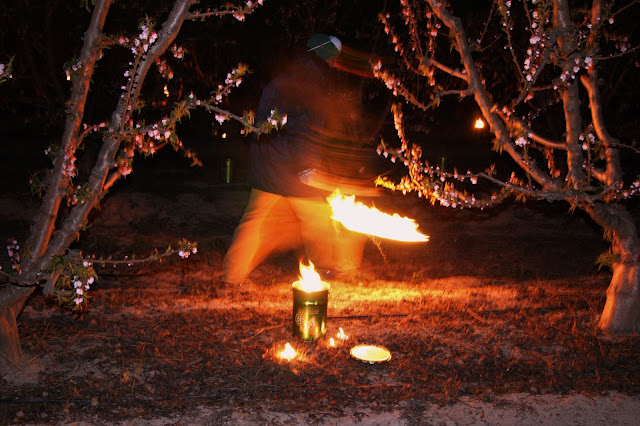 2:10 am: Another plot must be lit and then quickly, all temperatures drop and everything rushes. We have to light all plots as soon as possible.

3:15 am: All plots are on protection. I make a phone briefing with my colleagues. With some variations, the situation is much the same on the other farms.
The staff returns to the holding points to rest. It is a thankless and unpleasant work. It is night, after a truncated sleep, it is cold. When you have to go, you have to run but you don't see anything, it's messy, it's tiring. In addition, this night, with the wind, there is a lot of smoke. A dream… 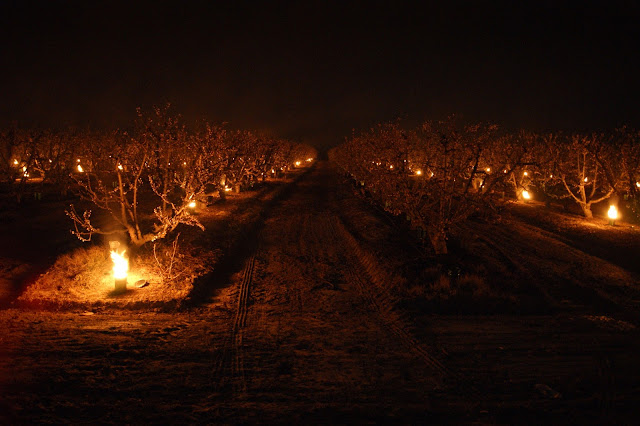 3:45 am: The staff had barely half an hour to rest. We already have to light again. Temperatures begin to drop again. This time, we will start to redouble the ignition, staggered on intermediate ranks, to distribute heat and improve the quality of protection.
Gradually, almost all plots must be redoubled, except one that mysteriously remains stable.

5:00 am: a plot begins to decline one more time. I wait to see if it is confirmed. Ten minutes later, I decide to light again. Ignition is therefore threefold. We return to the ranks of the first ignition, on the unlit cans. It's a long time I had not experienced a so difficult night. Finally, three plots will be tripled.

7:30 am: The late night is finally a little quieter, fortunately. The day dawns. This is the moment of the cold peak. But thermometers remain roughly stable, probably due to the surface already in protection. There is no need to light more. 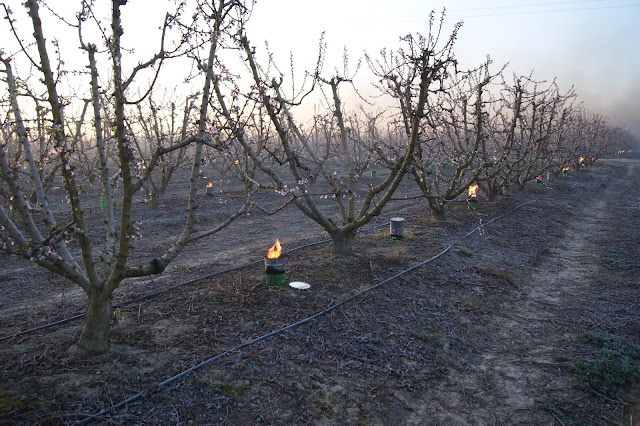 8:45 am: control thermometers are just going back above sensitive thresholds. We can begin to put out. I start with the least cold plots. It takes 45 minutes to put out everywhere.

What a night! No forecast had announced it so complicated. I don't remember a lonely night as long and difficult. They are usually episodes of several nights, including one or two very problematic. But this time...

In the course of the day, news start arriving from our neighbors who don't protect, or other production regions in particular Murcia and Valencia, regions that usually make us a hard competition. The damages are enormous. There will be probably a large output gap, on early varieties of April and May.
We were right to protect. If the months of April and May are not overloaded with fruit, there are good probabilities of good prices.
The misfortune of some makes the happiness of others. It is a maxim that is unfortunately often relevant in fruits and vegetables production. They are perishable products, with short life, extremely sensitive to market fluctuations. And a small decrease in production often has a big impact on the market.

But beware, we passed very close to a catastrophe. Observations made in the following days showed that some plots were damaged just to the limit. The thinning work will be oriented to offset the frozen parts. Ultimately, we will have a full crop.
But it was a near thing. 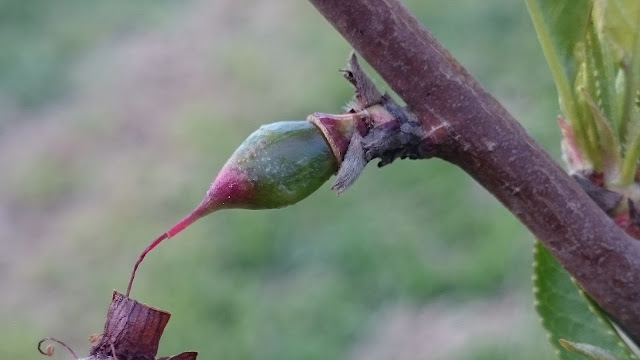 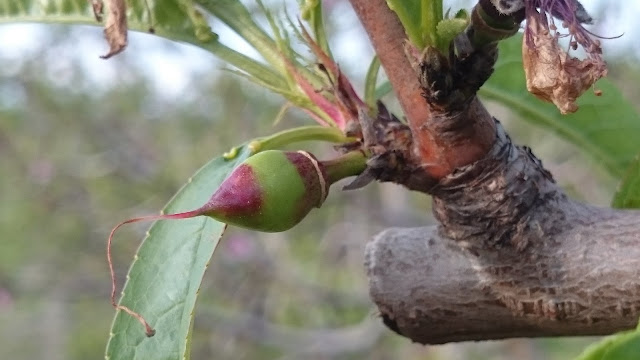 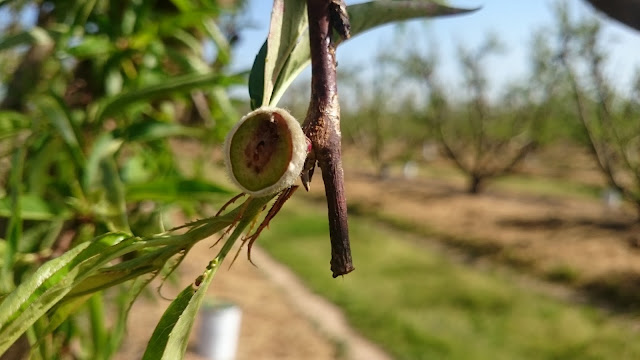 Young peach, bigger, several days after the frost, with internal damage to the stone. This fruit will not reach the harvest. 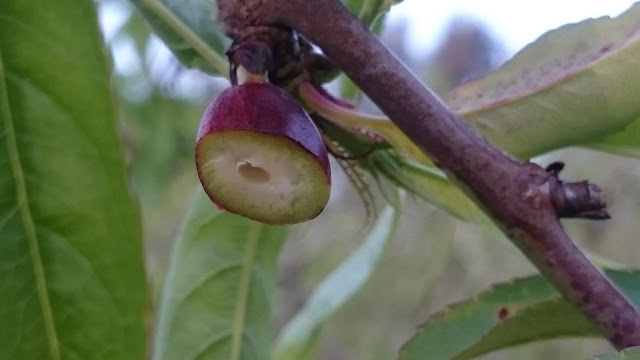