26- The tree that may be used for everything

After my publication No. 22 "A cup of linden tea? " in June, I can not resist the urge to show you these photos, taken last week in the South West of France, in the house of my family. My grandfather, very fond of linden tea infusions, only consumed his own harvest.
The north side of the house is sheltered by a dozen of major small leaf linden trees (Tilia cordata) planted in the late nineteenth century. 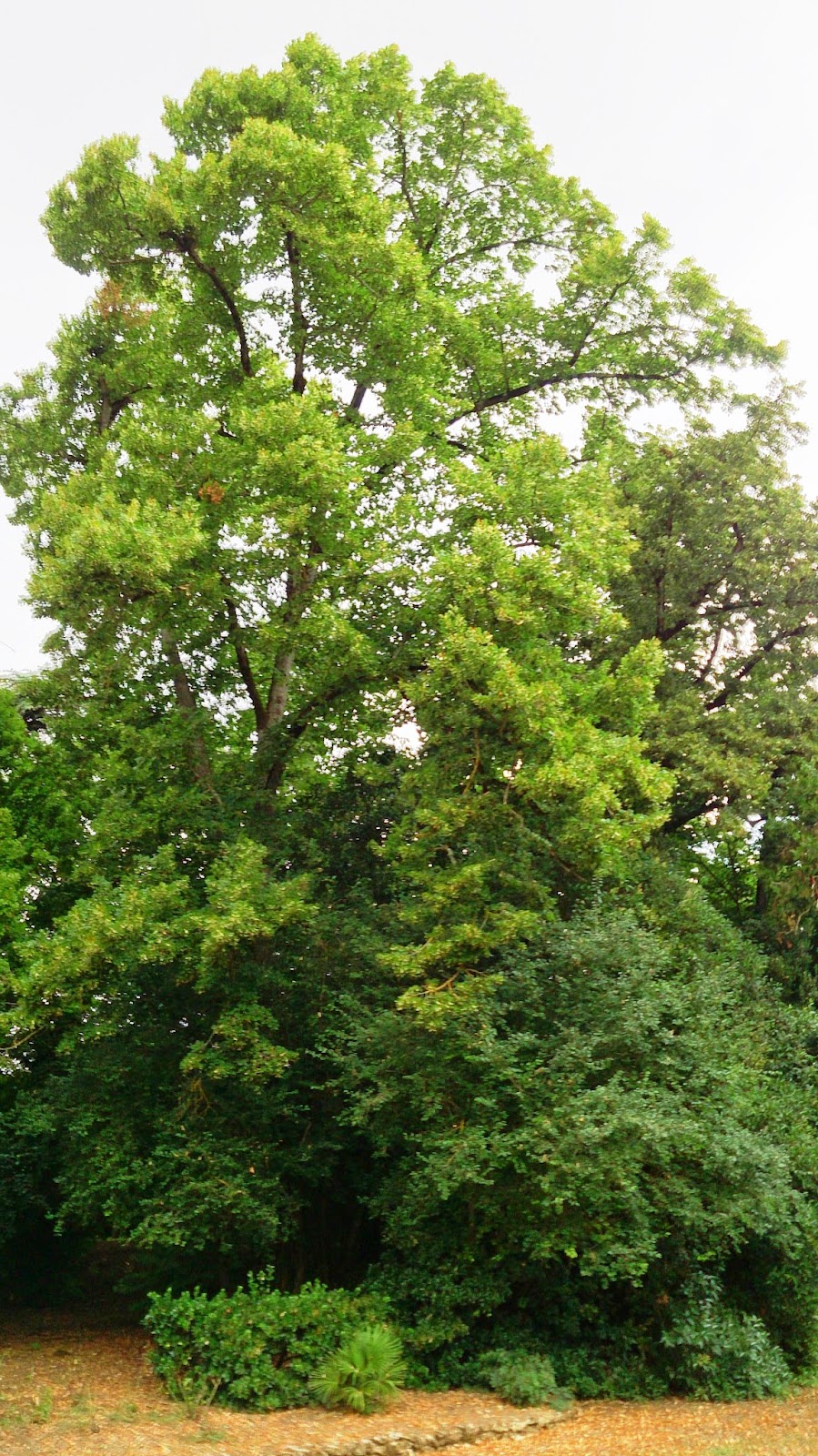 The south side is decorated with a magnificent specimen of silver linden tree (Tilia tomentosa) planted there nearly a century ago, and the ball shape is very spectacular. 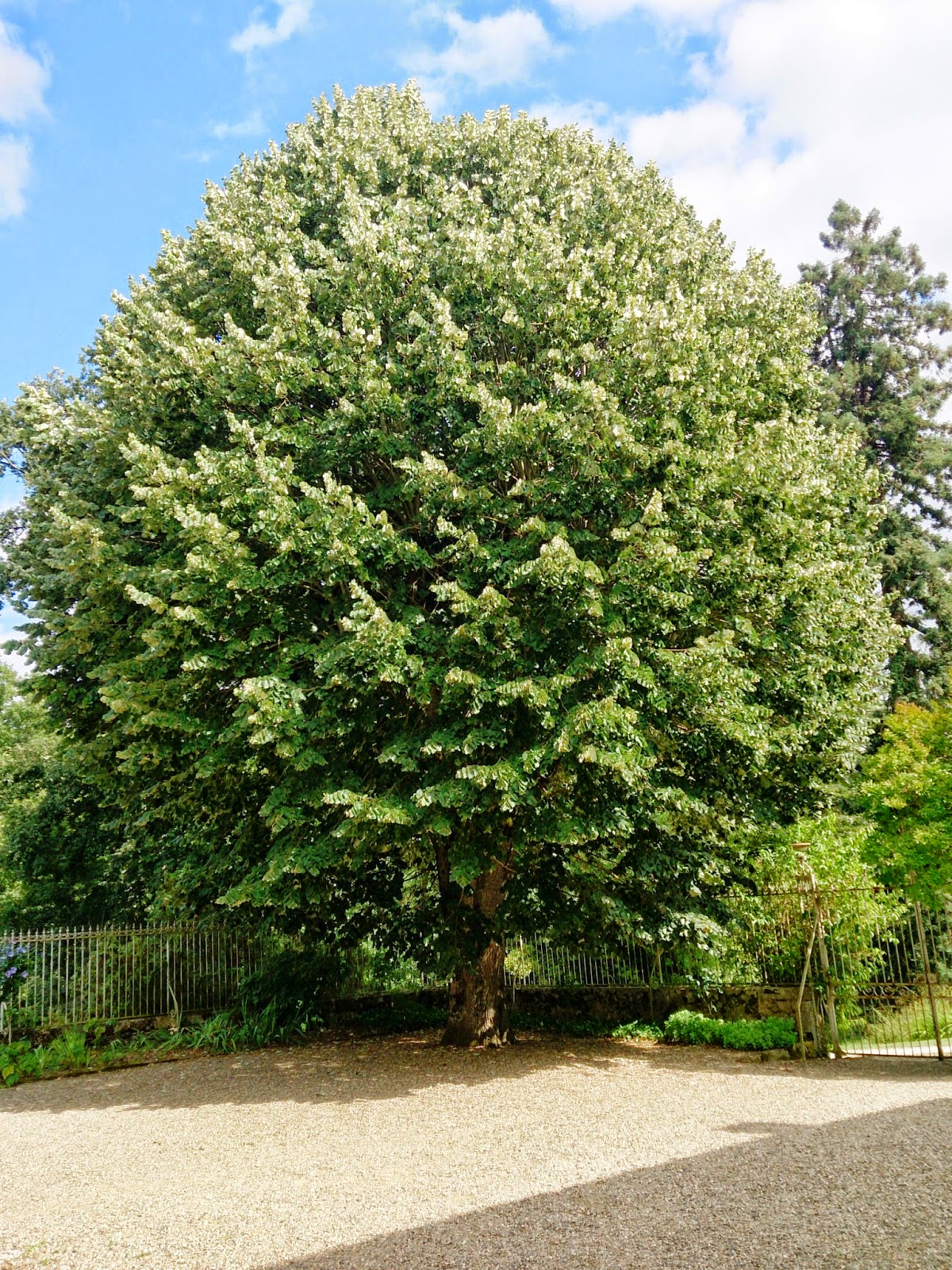 I spent many school holidays playing with my cousins ​​in the shade of their canopy.
These are trees that can live for several centuries. These are still relatively young, despite their large size.

It is the flower which is the most commonly used organ for infusion, and all types of linden have similar medicinal properties. The qualities that are recognized are numerous: antispasmodic, antidepressant, sedative, euphoric, sudorific, febrifuge, antirheumatic and diuretic. But if the concentration is high, the infusion can be exciting and cause insomnia. It is also recommended in cases of migraines, flu and anxiety attacks.
The flower is also very attractive to bees and produces honey. It can also be used in perfumery.
The sapwood (the very young wood just beneath the bark) is also used as an infusion to treat liver and gallbladder.
Tilia tomentosa buds can be used in the end of winter for their specific properties to fight against cholesterol and uric acid. It would also have effects to treat thyroid problems and have slimming effects. In homeopathic preparation, they effectively soigneraient problems hot flashes associated with menopause, and would be a strong tranquilizer.

Traditionally, the bark fibers has also been used to make baskets, ropes, canvas or sandals.
The roasted fruits can also be used as a coffee substitute.
The leaves can be used for fodder. They are also edible to humans. The young leaves can be eaten raw in salads. Invert sugars they contain can be consumed by diabetics.
Adult leaves can be dried and pulverized to create a very nutritious flour. It was used in France during World War II to replace wheat flour, requisitioned.

The wood, white, soft and easy to carve and work, was used to fabricate structures of furniture, clogs, kitchen utensils, foundry molds, musical instruments, matches, toys, pencils, paper pulp, etc.. In the Orthodox sacred art, it is the only authorized wood for the icons.
In some areas, linden wood was used for the production of grain bins, because the wood once dry, is so powdery, that rodents can choke. This wood is therefore, by itself, an effective protection against attacks by rodents.
The linden charcoal is used today for drawing, and for its filtering properties. Moreover, thanks to particular properties during its combustion, it was used for the manufacture of gunpowder.

In short, this is a plant to do everything, used for centuries for its many properties.

It should also be noted that there are several traditions and beliefs around the linden tree. It has often be lent the virtue of a guarantee of longevity for lovers. The seventeenth century writer Jean de la Fontaine, in his fable Philemon and Baucis, writing about lindens "as long as the spouses stay in their shade, they love till the end despite the efforts of years."
In 1792 in France, most of the 60,000 Liberty trees planted were linden trees. The linden tree became an important symbol of civic values ​​and freedom. This symbol, asociated with its high growth, the quality of the shadow it produces, and its high capacity for regeneration after pruning, made an ideal tree for schoolyards.

And finally, some interesting agronomic aspects.
To justify the production of linden is completely organic, we can just add that it is very little attacked by parasits.
There is a cochineal (Pulvinaria hydrangeae), common but rarely problematic, some Lepidoptera that attack the leaves, and some of gall mites eriophyids or phytopt type that can cause small galls on leaves. But it is important to say that these parasites are never problematic enough to require sprays, and in addition, their attacks always occur after the harvest of flowers for infusions.

Do not worry, you can prepare your infusions without fear, even if the term "organic" does not appear anywhere.
And as you see, an infusion of lime can not hurt you.
Publicado por Christophe Bouchet en 10:41